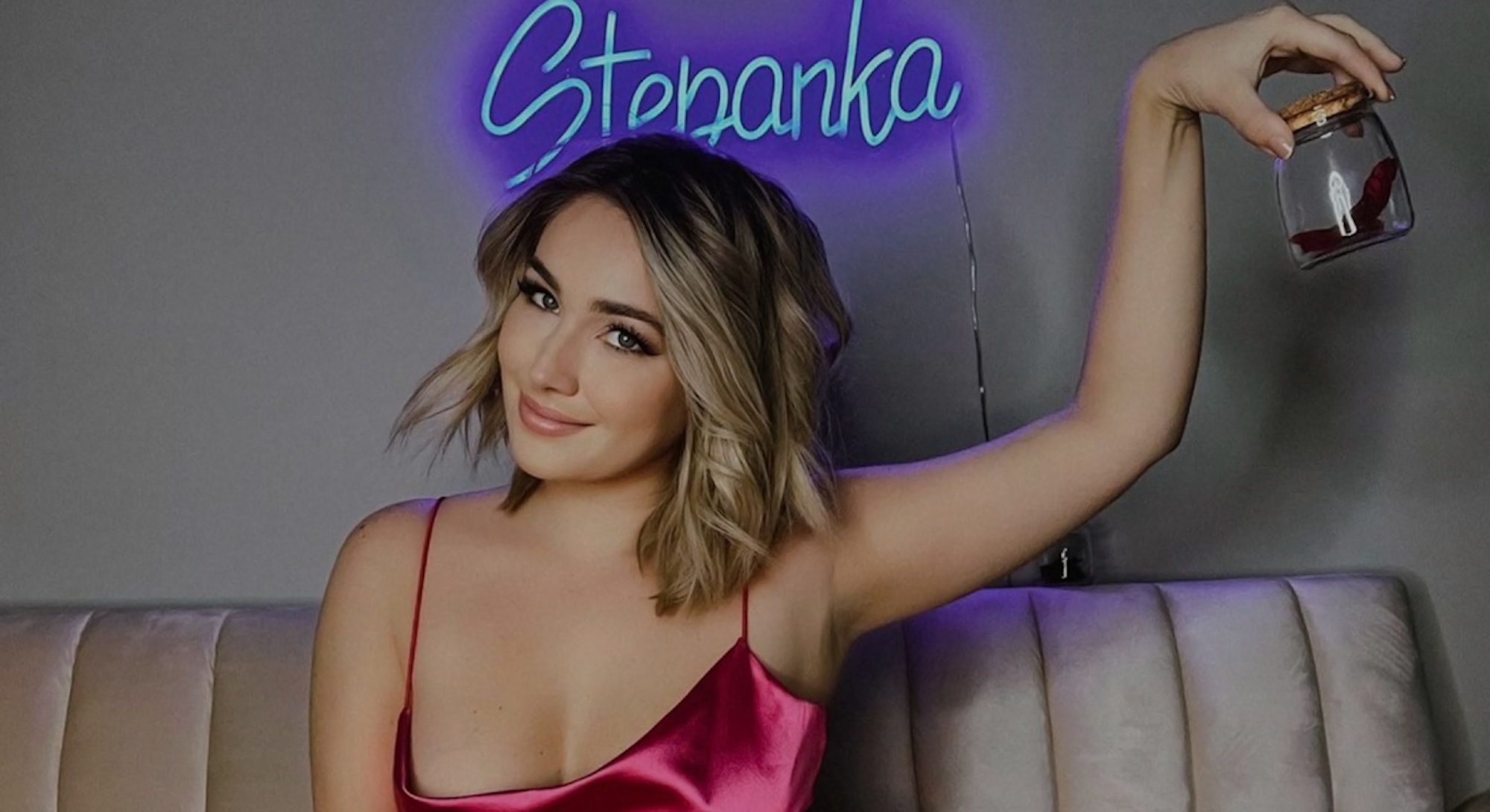 The tale is as old as time: An enterprising former reality TV star sells jars full of her farts online for a reported $200,000, but overdoes it so much that it sends her to the emergency room.

Realizing her time as a physical fart-on-command sex worker is over, she turns to NFTs for salvation, selling digital representations of her jarred farts.

If you’ve been online the first two weeks of 2022, you’ve likely seen the story of 90 Day Fiancé star Stephanie Matto. Last week, Input itself covered Matto’s pivot to selling non-fungible works of (f)art. The story is emblematic of the weirdness of the new world of NFTs.

“The project has really captured the mainstream media a lot,” Darren Lamb of Full House NFT Studio tells Input exclusively. The 27-year-old says he approached Matto in fall 2021 about the prospect of producing an NFT collection.

Lamb declines to give many details about his life, but says he lives in Essex, England. (His Twitter posts indicate he was born outside the U.K.) He has previously experimented with other NFT projects. One of them was a curiously similar project, EtherFartJars, a collection of 100 black-and-white rough sketches of jars that launched in September 2021. (The project has since been taken offline by NFT platform OpenSea, and Lamb claims not to know why.)

Lamb says some of his friends had come across Matto’s sideline selling physical farts in jars and pointed out the similarity between her business and his collection. He contacted her “three months ago” and proposed a collaboration. “I said, ‘You know, I’m in NFTs, I did a project like this, I’ve got a team and we can build projects. We’ve got everyone in place to be able to do such a thing. Are you interested?’” Lamb recalls.

The two discussed the possibility of the NFT project, how it could be carried out, and came to an agreement — the terms of which neither Lamb nor Matto were willing to disclose to Input.

“I don’t think I’ve seen a project garner that much interest from the general public,” says Lamb. “In the news, I rarely see NFT projects. It’s amazing to see so many people were reading about it, and so many people who haven’t heard of NFTs before react or join the community.”

That press coverage has been key to the enterprise. And it’s also the thing that doesn’t wholly make sense about the Fart Jars NFT project.

In an interview with Input, Matto’s recollection of the genesis of the NFT collection is subtly different. “It kind of started to come to fruition towards the end of my fart jar–selling business,” she says. “Once I became aware I had physical limitations, and I wasn’t going to be able to produce fart jars at the rate I was, I started thinking, ‘Well, maybe instead of doing actual physical jars of farts, I could try to do this as an NFT.”

U.K. media outlet and PR agency Jam Press published its version of Matto’s tale on January 4. In the piece, Matto tells of a visit to a hospital near her home in Connecticut after feeling “a pinching sensation around my heart,” caused by drinking three protein shakes and a bowl of black bean soup designed to help build up her gaseousness.

“A few days before Christmas, I was fulfilling a lot of orders,” she tells Input. “I got a little too greedy, and wanted to fulfill all the orders I received, so I took in a lot of proteins and beans and later that evening had to go to the emergency room.”

The fartfluencer believed she was having a heart attack — but it was just a case of bad gas, doctors at New Milford Hospital in Connecticut discovered after performing an EKG and blood work, she claims. She was dispatched from the hospital with a gas suppressant.

“I always knew there had to be an end to this,” Matto tells Input. “I couldn’t just be ‘fart jar girl’ forever. That’s when the whole NFT project really became a push for me. I saw the potential. I saw it as an opportunity to break into the NFT world.”

The visit to the emergency room is what makes her story so compelling and is why the world’s media leaped on the story. At least 183 pieces have been published about Matto since the beginning of the year, according to an analysis of LexisNexis’ international database of news publications.

Except the timelines don’t always match up. Jam Press’ story — which Matto says came after the organization contacted her — reports that the reality star “began selling her farts in a jar in November [2021], after receiving requests on the adult-content site Unfiltrd.” While he’s not certain, Lamb claims to have first contacted Matto a month earlier, after seeing she was selling physical farts in a jar.

The @FartJarsNFT Twitter account was set up in January 2017 — though it may have been established under a different username and subsequently changed. It began hyping its imminent launch eight days before Christmas — prior to when Matto says she ended up in the hospital.

Matto herself was a little confused about the sequence of events when she spoke to Input. The hospital visit “was around the time of the Jam Press coverage,” she says. When asked whether her stay was before or after she was approached about the NFT collection, Matto replies, “That was before. No, no, I’m sorry — that was, I believe, after.”

Matto says a lot of people have questioned the authenticity of her story. She points to an Insider piece in which one of her clients is interviewed as evidence of proof — though it doesn’t mention the timing of events.

Asked by Input why one of the photos in the Jam Press media package that says it depicts “Steph Matto in hospital after her heart scare” is the same as one featured in this 2018 Mail Online story about her hospital visit for treatment for a rare bone marrow disorder, Matto says, “I can’t really control what every single news outlet uses. I provide as much proof as I can, but there’s only so much I can do.”

Confronted with the same information about the photograph, Lamb tells Input after a pause, “I do not know about that.”

Matto offers to take a look through her cell phone to try and find an actual photo of her in the hospital from her purported stay for excess gas. When Input follows up, she says she checked, and the only photos that existed of the hospital stay were on a friend’s Snapchat account. “But their Snap was banned recently,” she says via email, “and they can no longer access them.”

“It calls into question whether this was really a story at all — or just a made-up PR stunt.”

The timeline confusion may well be a simple case of misremembering. The photos in the Jam Press story may well be due to miscaptioning. And who among us hasn’t faced the problem of having the sole evidence of their hospital stay on a friend’s ephemeral messaging app, only to see that friend banned from their account?

Doubts — like a nasty fart — linger. “The stories I’ve read aren’t medically accurate,” Vicktoria Tacos, a Canadian fartfluencer, tells Input. “I suppose they have done their job from a publicity standpoint, so good for her!”

Twitter user @interlunations, who first spotted disparities in the reporting around Matto’s NFT project, is still convinced it’s bogus. “Based on the evidence that the NFT launch was planned well in advance, that it was minted the day before the hospitalization story and that [journalists] used a three-year-old photo to show the influencer as ‘hospitalized,’ it calls into question whether this was really a story at all — or just a made-up PR stunt to promote sales of a newly minted NFT project,” says @interlunations, who declined to be named in this story, citing their prior critiques of crypto projects that caused them issues.

As for the people behind the Fart Jars NFTs? “The plan is to just stay consistent with it, show people the project is legit,” Lamb says. “Once people get over the shock factor, then they will come.” Meanwhile, Matto is taking it all in stride: “I try not to sweat too much the criticism and the discourse that I might be getting online.”