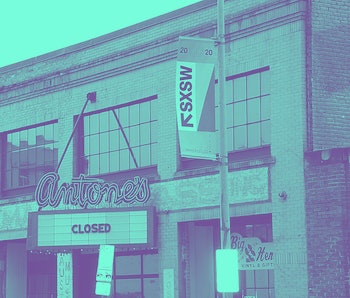 SXSW 2020 was canceled due to what else but the coronavirus pandemic, and with it, dreams were dashed for many filmmakers who planned on debuting their latest work in front of a live audience. Several companies have stepped in to help promote their creative vision anyway, including Mailchimp which today launched a site where anyone can stream an assortment of 50 short films intended to premiere at the festival.

Mailchimp Presents — The brutalist website does nothing more than present visitors with a list of short films and a couple of categories to sort them by, such as documentaries and films made by high school students. That's sort of the point though — to watch the videos, not get distracted by flimflam.

Hosting the videos online is, of course, not as satisfying as having a live audience watching them together with all their reactions enhancing the experience. But by creating a dedicated website, Mailchimp can at least give artists a platform to debut their work that they otherwise lost out on.

Amazon's SXSW platform — Amazon has similarly stepped up to host the festival's feature-length film lineup through Prime Video. Starting April 27th, the company will be holding a 10-day "online film festival" where 39 films will be free to watch for anyone with a free Amazon account, no Prime membership required. Filmmakers who have chosen to premiere their movies with Amazon will be compensated with an undisclosed screening fee.

That initiative has been criticized, however, with some filmmakers describing the screening fee as "laughable," and saying that offering their movies online for free will make it harder for them to sell the film to a distributor. Amazon hasn't said whether or not it intends to buy rights to any of the movies it's hosting but you can imagine if the data shows one of them is popular, Amazon might want to keep it around.

Either a way, a lot of artists were probably excited by the opportunity to share their work at SXSW, and watching the videos online instead is the least we can do to show them some support during these tough times. I just watched Joy Ride and thought it was pretty good.