Surprising nobody, Big Tech employees are overwhelmingly donating to Biden 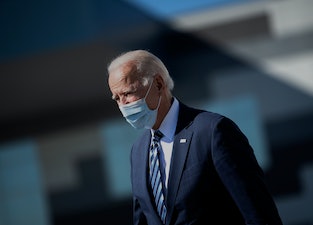 The percentage of contributions by employees of Big Tech that have gone to Biden's campaign.

Employees at the biggest companies in tech have chosen Biden as the next president, contributing nearly twenty times as much money to the Democratic nominee as to Trump. That's according to WIRED, which reviewed public data covering the individuals who are required to report their employer because they donated $200 or more to a presidental campaign.

The companies included in the report are Alphabet, Amazon, Apple, Facebook, Microsoft, and Oracle. In total, employees at these companies have contributed $4.7 million to Biden — and a pitiful $240K to Trump.

Why wouldn't tech prefer Biden? — These findings will certainly rile up Republicans including Trump who have long claimed that Silicon Valley is biased against conservatives and censors them unfairly (it doesn't). But the donations obviously aren't surprising. Biden has been far less combative overall with the tech giants than Trump has. He doesn't take the same hawkish stance on China that could trigger a tech trade war, he hasn't retaliated against tech companies over personal quibbles, and he supports immigration key to the industry — something Trump recently cut off.

In regards to the question of antitrust enforcement action, both Biden and Trump have said it's worth investigating. Many people inside the industry agree that the major platforms might have too much power to pick winners.

But you can see Trump's motivation to interfere in tech is primarily based in self-interest, not in support of a common cause like fostering competition. He tried getting the USPS to start charging Amazon higher rates because CEO Jeff Bezos owns his arch-nemesis, The Washington Post. And after Twitter placed a fact-check notice against one of his tweets, Trump retaliated by signing an executive order attempting to curb regulations protecting social media platforms from liability for what their users post. That's not to mention that he has pushed TikTok to sell itself to Oracle in what looks like a favor to the founder of that company.

That type of interference doesn't mesh with libertarian ideals in the Silicon Valley of the best products winning on their merits.

A return to reason — It's true that Biden has also signaled that he might try and modify protections for social media companies, but for a converse reason — he believes that Facebook doesn't censor Trump over misinformation enough. Trump has repeatedly made claims that mail-in voting is easy to manipulate, which isn't true, and Facebook has only gone so far as to label his tweets with fact-checks. But there are surely better ways to address that issue that are better than gutting Section 230, which allows platforms to experiment with moderation without being held liable for any harmful content they miss. Limiting platform control, algorithm changes — there are other ways. Biden (it's hoped) can be trusted to at least listen to the nuances with a level-head and not act recklessly.

And of course besides tech issues, Biden is also much more aligned with the socially progressive views of the Silicon Valley. He won't strip away freedoms like pro-choice and gay marriage rights that Trump is most certainly ready to do away with, or force school children to learn the Bible.