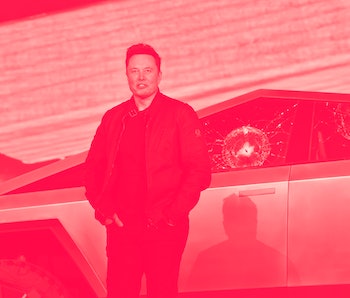 Tesla’s unreal-looking Cybertruck no longer has a release date at all. Not even an estimated one.

Last summer, Tesla pushed its production estimates from “end of 2021” to “some time in 2022.” Now the all-electric automaker has taken down all reference to a 2022 release from its website, Edmunds reports.

As recently as last month, the Cybertruck order page told visitors: “You will be able to complete your configuration as production nears in 2022.” The final part of that sentence has now been removed.

Which leaves us with a potential release date of… never? As The Verge notes, Technoking Elon Musk has promised an updated product roadmap during Tesla’s next earnings call, which is scheduled for January 26. At this point, though, do we really have any reason to trust whatever dates Musk next claims the Cybertruck will be available?

The variants problem — The reasons for this apparent production delay are unclear. Musk isn’t exactly shouting from the rooftops about this. If you weren’t paying attention to his Twitter account (which, to be fair, is a good move for your mental health), you probably wouldn’t even know there needed to be an updated production roadmap.

Even with our limited insight into the internal workings of Telsa, there are some general factors that might contribute to the delay. Production of other Tesla vehicles (and the Cyberquad for kids) could be using the majority of Tesla’s resources, for one thing. The Cybertruck’s parts aren’t exactly standardized.

There’s also some confusion over which flavor of Cybertruck is even being produced first. The Cybertruck website at one point mentioned three versions of the vehicle: single-motor, dual-motor, and tri-motor.

But now Elon says a “4 motor variant” will actually be produced first. Which is confusing, because we didn’t even know such a variant existed, never mind that it would be the first to ship. Even the tri-motor version was meant to start at $69,900 — so Tesla fanboys hoping to get their hands on the first-produced Cybertrucks can probably expect to pay close to $80K for it.

There’s not going to be a Cybertruck — Another Cybertruck delay is pretty much the least surprising thing to come out of Tesla. This company just loves to push release dates.

There’s a pretty simple reason for that: Elon Musk is at the helm. And Elon Musk loves to make promises he can’t keep. The man probably gets off on it. Remember when the company’s Full-Self Driving software was supposed to be ready to go in 2017? We’re nearing half a decade past that promise, now, and Full Self-Driving is still nowhere near ready for the big time.

While Musk takes his sweet time releasing his glorious cyberpunk fantasy vehicle, other companies are swooping in with powerful electric trucks of their own. Ford’s F-150 Lightning is driving off the factory floor this year, and more than 200,000 pre-orders have already been placed for it. Rivian’s all-electric pickup is already sitting in customers’ driveways.

The Cybertruck will be ready whenever Musk gets it ready. That could be next month or next decade. The only certainty, really, is that his next promise probably won’t come true, either.