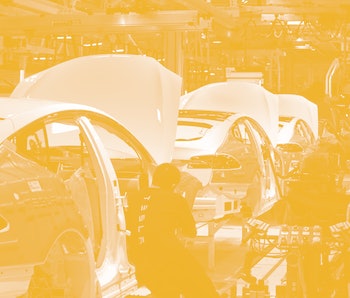 Tesla has told workers at its Fremont, California factory to halt production on Model 3 vehicles, Bloomberg reports. A source familiar with the production facility’s operations said Tesla did not provide a reason why production would be paused.

There are plenty of reasons why an automobile manufacturer might cut production for a short period of time; supply and demand need waxes and wanes in unpredictable ways, and Tesla may just have a surplus of Model 3s ready to go right now. It may also be short of key components.

More concerning is Tesla’s decision to not pay workers for this forced time off. Last year was a record year for the company, pushing it upward to become the most valuable automaker in the world.

If it weren’t for those semiconductors… — With no word from Tesla on why it’s shutting down the Model 3 production line, we’re left to our own speculation.

One theory is that the temporary shutdown has something to do with a global shortage of semiconductors. In announcing its Q4 2020 earnings report last month, Tesla mentioned that its overall production has been affected by the general lack of semiconductors being made worldwide — a problem that is affecting just about every hardware and manufacturing industry right now.

Tesla finance chief, Zach Kirkhorn, said last month that Tesla is working “extremely hard” to mitigate the effects of this shortage. Other automakers like Volkswagen and General Motors have already scaled down production for this reason — there’s a fair chance Tesla’s now doing the same.

Pay your workers, Elon — No matter the reasoning for the Fremont factory’s Model 3 pause, it’s pretty unforgivable that Tesla has decided not to pay its workers for their forced time off. The company had a bumper 2020, skyrocketing to become the most valuable car-maker in the world. And that success has helped Elon Musk become, at various times, the richest man on the planet.

There’s obviously enough money to pay Model 3 production staff for those few days off — especially given that they weren’t given a choice about doing so. Asking your workers to use vacation time for that period is just cruel.

Sadly, because 2021 has only just begun there’s a chance Telsa is in for similar production pauses as the year goes on, especially if semiconductor production doesn’t soon get back up to full speed.