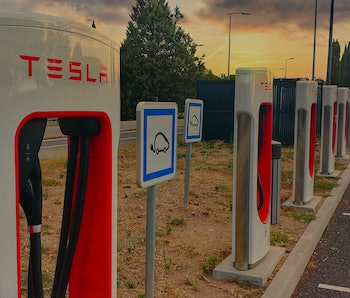 Nearly a decade after its introduction, Tesla’s extensive line of Supercharger stations built exclusively for the company’s electric vehicles will finally begin accepting other EVs by the end of the year.

In a tweet from the Technoking himself, Elon Musk appeared to confirm the upcoming availability, writing, “We created our own connector, as there was no standard back then & Tesla was only maker of long range electric cars. It’s one fairly slim connector for both low & high power charging.” He continued, “That said, we’re making our Supercharger network open to other EVs later this year.”

Seeing as how Superchargers are far and away the most extensive — and well-recognized — EV stations in the world, the news that the formerly Tesla-only locations will soon be open to presumably anyone with an electric car is a genuinely big deal for the industry. As much as we hate to admit it — this is a positive move on the Technoking’s part.

... Of course, that’s pretty much all we have in terms of details at the moment, so who knows if Elon’s promise will pan out on time, or at all. It’s not like he has the best track record on that front.

Superchargers will need to adapt, literally — In order for Musk to make good on his plans for Supercharger stations, Tesla will need to offer some kind of adapter for any third-party EV that intends to use its locations. As it stands, Superchargers currently in the U.S. utilize a charger designed exclusively with Tesla vehicles in mind, although as Electrek notes, in Europe “Tesla is now using the CCS standard, and it is going to be easier for them to open the Supercharger network in the market.”

It’s unclear currently how that change will manifest itself, although it’s probably safe to assume it will be a relatively straightforward option at Supercharger stations.

His track record doesn’t inspire confidence — As we mentioned above, sure, it certainly would be great to see Superchargers available to anyone with an EV, Tesla or otherwise... but we aren’t holding our breath here. Musk has consistently overblown claims and capabilities at Tesla, and we all know how that whole Boring tunnel thing is going. We’re currently taking bets to see which becomes a reality first: open Superchargers, or his other plan for a Tesla diner.