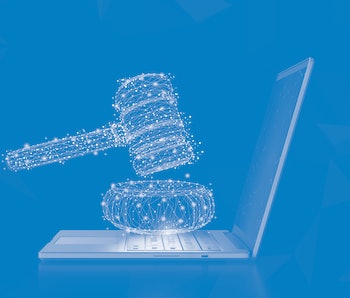 The Collin County District Court in Texas decided to see how trials fare using Zoom, according to Reuters. The summary jury trial is believed to be the first virtual trial in the country. Jury selection for a case against State Farm was livestreamed on YouTube, and like most massive Zoom calls, it got off to a slow start.

The Zoom trial trial — A summary jury trial allows lawyers to see how a case would play out before a jury and the resulting verdict is non-binding. Officials involved felt such a trial would be a good testing ground for a remote jury since these trials typically last for only a day.

Judge Emily Miskel provided tech support for the dozens of people who logged in for jury selection, ultimately taking about half an hour to get things started. Then, the presiding judge Keith Dean went over the case in which State Farm stands accused of failing to cover damage to a property from a 2017 storm. The call focused on Judge Dean in speaker mode for any statements from him, but switched to gallery mode for the actual jury selection process.

Reimagining the courtroom — While hearings have continued to take place virtually, the prospect of jury trials is daunting. Social distancing and personal protective equipment can be enforced once the trial is underway, but the crowded nature of jury selection makes getting to that point difficult.

Texas held an average of 186 jury trials every week last year, and these cases have largely been on hold since COVID-19 was declared a pandemic. Once jury trials resume, Indiana will allow videoconferencing for civil suits and Arizona will accept virtual jury selection.

Virtual juries could mean real mistakes — Fully conducting a jury trial online would present various issues ranging from key information getting lost in a video freeze to the inability for real-time background searches on the case from the jurors. Avoiding putting hundreds of people in waiting rooms for jury duty is a much simpler part of the process to digitize. If found effective, jury selection could be done virtually long after the pandemic ends.

The only real question is whether Zoom's reputation will see it survive long enough to be considered for widespread use in the legal system, especially with Microsoft, Google, and even Facebook nipping at its heels.