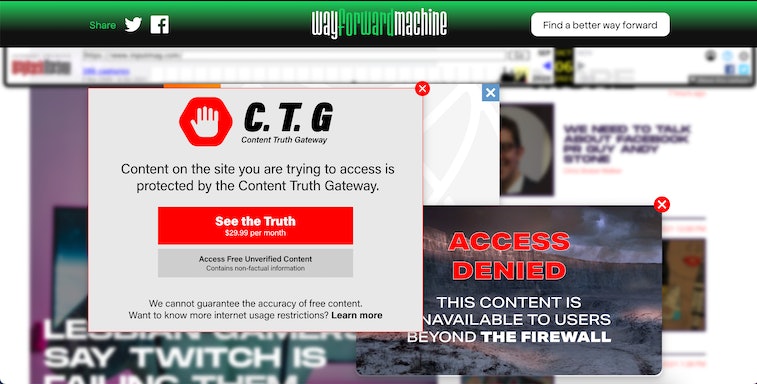 The Internet Archive’s “Wayback Machine” is an invaluable tool, preserving the internet’s complex history for public eyes. Now, to celebrate the organization’s 25th anniversary, the Internet Archive has created a tool that peers in the opposite direction, looking toward what the internet might look like in the future.

The “Wayforward Machine” isn’t exactly a crystal ball — we haven’t created that kind of technology just yet — but it does see a future of sorts. A very dark future, where every website is covered header-to-footer in ads and restrictive messages and an organization called the Ministry of Truth is shutting down websites “for your own good.”

The tool itself is fairly rudimentary. Put in any web address and the Wayforward Machine will load it up beneath a scattering of disturbing pop-ups. One asks you to provide a retina scan or thumbprint to access the website, along with a checkbox agreeing to receive “non-specific marketing ad nauseum” in association with your biometric profile. Another says the site has been classified as “Thought Crime” in your region.

The pop-ups keep coming no matter how many times you close them. It doesn’t even feel like much of a stretch to see this in our future.

A not altogether unbelievable timeline — Attempting to close some of the ads will lead to another Internet Archive webpage explaining the basis of the project. The page also includes a number of links to external articles explaining various threats to internet freedom, such as this piece from The Atlantic about how the internet is rotting.

“Access to good information is not a given,” the Wayforward Machine subpage reads. “If you value it, you have to protect it.”

The Internet Archive has also created a very dystopian timeline explaining how the internet could theoretically become shackled to this extent by 2046. Kicking things off is the repeal of Section 230 in 2022, which the Internet Archive says has “devastating effects across the web.” Over the next few years, end-to-end encryption is banned around the world; strict copyright acts are passed; large conglomerates merge to form superpowers; Wikipedia is “driven underground;” schoolchildren begin receiving ad implants.

Time to take action — The Internet Archive’s tool is somewhat exaggerated, yes. It might be a stretch to assume all physical copies of George Orwell’s 1984 will be destroyed around the world, for example.

Other moments on the timeline are easier to believe. Section 230 is the centerpiece of a monolithic conversation being had across all parts of the U.S. federal government. Major corporations are being investigated for antitrust violations, but not much has come of those efforts just yet — it certainly wouldn’t be unheard of for Big Tech to become even more monopolistic in the future.

The complete picture of the internet’s future provided by the Wayforward Machine is nothing short of terrifying. And that’s exactly why the Internet Archive created it — not just to present these issues but to help the public see why we need to be more than just passive observers in this struggle. The Internet Archive urges visitors to spread the word, campaign for the rights of libraries and communities, and support the organization’s work monetarily.

Will “Orwell activists” be sentenced to life in federal prison in 2045? We’d like to say no — but we also won’t discount the possibility completely.