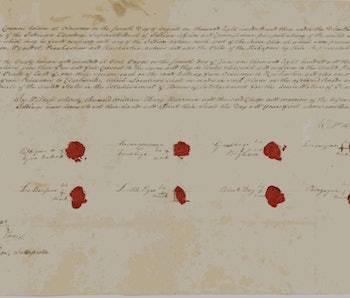 With the seeming omnipotence of the modern-day internet, it’s all too easy to believe every piece of known information has been uploaded to servers for public consumption. Unfortunately, the internet, much like the rest of life, is dominated by narratives pushed by those in power.

Sometimes we’re lucky enough to see these imbalances reckoned with. This week the U.S. National Archives, in collaboration with the Museum of Indian Arts and Culture in Santa Fe, New Mexico, announced the digitization of hundreds of Indigenous treaties for public online viewing. At launch, the Indigenous Digital Archive (IDA) Treaties Explorer contains 374 ratified treaties that have never before been digitized.

Despite many having been written and ratified hundreds of years ago, the treaties are pertinent pieces of U.S. history that aren’t often explored by researchers, students, or the public in their original forms. The effort is fairly monumental, in the context of the overall National Archive, and it will hopefully pave the way for similar projects in the future.

More than an archive — The IDA Treaties Explorer is, for the most part, just that: a file explorer filled with digitized treaties. More impressive still are the custom mapping tools created to make exploring the archive much more interactive.

A list of hyperlinked files might be useful for someone looking to study a specific treaty; for those unfamiliar with the subject area, it can be daunting. The teams behind the Treaties Explorer has built a few tools to help browse the archive with ease — like map exploration tools and timelines.

Broken promises — Indigenous treaties are an important part of American history, but they’re often swept under the rug by the overpowering narrative of American dominance. These treaties detail the many, many promises the U.S. has made to Indigenous tribes throughout the country’s lifetime — and, as you might expect, many of those promises were broken.

“Of all the things we have custody of and are responsible for — even the Charters of Freedom — I believe the Indian treaties are the most valuable documents in terms of reading the original language and the government promises, and realizing what was never delivered,” David Ferriero, archivist of the United States, said in a statement.

While this project will obviously not right the many wrongs carried out upon Indigenous peoples in the United States, it’s a form of accountability that’s exceedingly rare. As Smithsonian Magazine points out, these treaties have been used to decide land disputes as recently as July of this year.