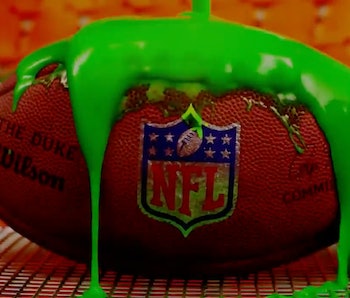 Nickelodeon aired its first NFL game ever, and it definitely made a green splash. SB Nation reports that the network, which caters mostly to children, broadcast the Bears and the Saints’ playoff with cartoonish flair. Nickelodeon’s parent company ViacomCBS has no issues teaming up with its own CBS Sports as well as the NFL “to elevate the thrill of this game for kids and families to enjoy together." And if you're wondering what "elevate" means, well... mostly it means added virtual slime.

The NFL should always be like this — As regular, working parents with small children edge towards month 3,482,445 of the pandemic without a weekend house to escape to, they likely have an encyclopedic knowledge of kids content, from Frozen to Nickelodeon’s own Peppa Pig. While some kids like football, the stop and start nature of it can prove boring for many, especially the younger ones. Heck, we struggle to make it through more than a few minutes ourselves.

No matter how you feel about football or what your age, Nickelodeon has cracked the code on a way to make you enjoy watching it. Pre-recorded clips popped up to explain the rules, fancy footwork was rewarded with lightning animations, and the touchdown zone was doused in virtual slime whenever a team scored.

Of course, someone had to actually get slimed. Saints coach Sean Payton took one for the team, swapping out a Gatorade bath for something a little bit harder to get out of your hair.