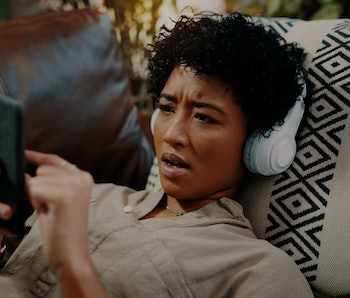 This is not a parody piece. This is not a meme. Spotify is testing short-form video content in a similar style to Snapchat and Instagram’s “Stories” features. Yes, we’re a bit pressed about it.

The latest feature’s first big test is on Spotify’s “Christmas Hits” playlist, where a minimally invasive bubble prompts users to “Tap to see the story.” Doing so presents the user with a series of full-screen, mobile-optimized videos of various artists speaking about holiday music and Christmas memories.

The videos show quite a wide range in terms of content and quality. There’s Meghan Trainor showing off an ugly Christmas-themed sweater with a llama on it and then subsequently plugging a song off her latest album, both videos taken with a front-facing phone camera. Then we have Kelly Clarkson and Brett Elredge — perfectly lit, filmed with a professional camera of some sort — chatting about their latest Christmas song.

The best part of the new feature is how easy it is to exit the playlist “story.” Just swipe up and back up slowly.

Unclear how far this will go — Spotify hasn’t officially announced this feature as a full-scale operation, so it’s difficult to say whether or not it will spread further than it already has. The company did confirm to Engadget that this is a test.

"At Spotify, we routinely conduct a number of tests in an effort to improve our user experience,” Spotify said in a statement. "Some of those tests end up paving the path for our broader user experience and others serve only as an important learning. We have no further news to share on future plans at this time."

Some users have noticed Stories showing up on other playlists curated by Spotify, like rap playlist “Tear Drop,” and on an enhanced version of Megan Thee Stallion’s Good News.

Not everything needs a Story — For the most part, 2020 has been a great year for internet culture. We’ve all been spending more time in virtual spaces, leaving open much room for rapid innovation and enhancement.

But being Extremely Online like never before has also sent internet companies spiraling for what little attention we have left — and, more often than not, their experiments tend toward the familiar, towards the formulas that keep bringing users back. Hence why we now have Fleets to deal with on top of everything else.

The proliferation of the Stories format, popularized by Snapchat long ago, has been so pointed that it’s turned into a joke. And for good reason: the format works much better in some places than in others. We really don’t need Stories on LinkedIn, for example. The jury’s still out on Spotify’s take on the trend; we’ll need more examples before we pass too much judgment.

We are rapidly approaching a convergence point where every app looks and feels the same. Internet companies are hopeful this will keep users coming back again and again — but it might be growing tired more quickly than they anticipated. Spotify might be better off just sticking to music.