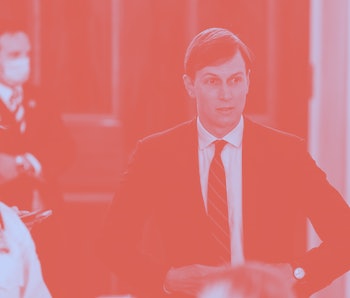 Donald Trump’s re-election campaign has been fighting with Verizon, AT&T, and T-Mobile over its efforts to send mass text campaigns to those who hadn’t signed up for them, according to a new report from Business Insider. The main player in the battle is Trump’s top adviser and son-in-law, Jared Kushner.

The fight isn't a new one but ratcheted up significantly at the beginning of July when Trump’s team decided to go ahead and send texts to people who hadn’t signed up for them. A third-party firm in charge of screening mass text message campaigns blocked the texts. Jared Kushner then took matters into his own hands by calling the CEOs of AT&T, Verizon, and T-Mobile with his complaints.

The Trump campaign is — big surprise here — calling the blocking of these text messages an issue of free speech.

“Any effort by the carriers to restrict the campaign from contacting its supporters is suppression of political speech. Plain and simple,” said Tim Murtaugh, Trump’s campaign communications director, in a statement to BI. It's not plain at all, but that view of it is definitely simple.

One of the text messages in question, as reviewed by BI, reads:

"Hi it's Pres. Trump. I need your help ASAP to FIGHT BACK against the radical left & take back my majority. Take a stand NOW."

It’s proven difficult to parse out the complicated legality of this issue, according to those familiar with the matter. But it’s also apparent that, for the Trump campaign, this isn’t an issue of legality or even of free speech — it’s one of power.

Fifty shades of grey legality — Anyone who exists on the internet, or even just owns a cell phone for that matter, knows that spam is incredibly annoying. It’s pesky enough, in fact, that the United States has set up plenty of laws around when it is or isn’t acceptable to badger people without their permission.

The cell phone companies viewed the mass texts as a possible violation of anti-robocall laws, as well as Federal Communications Commission rules, according to two Republican sources familiar with the matter. The campaign fired back by stating that the texts did not violate the 1991 Telephone Consumer Protection Act, which forms the basis of anti-spamming laws.

Campaign staffers also say the legality of the mass texts exists in a grey area because they’re being sent manually. Most robocall and anti-spam laws are limited in scope to only include automated messages.

More than anything, the disagreement over the text’s legality makes it obvious that these laws need to be updated and clarified. Spam is unavoidable in 2020; the least we can do is create federal guidelines for when it’s legal to bug people via text message. Send unsolicited propaganda seems like a particularly egregious sort of spam, though, especially in a country that enshrines freedom of association and the option (at least on paper) to subscribe to the views of any political party you wish to.

The blame keeps shifting — The cell carriers and their lobbying groups agree that the Trump campaign shouldn’t have been able to send these text messages in the first place. They’re having more trouble agreeing upon who should take the blame for that decision.

In statements to BI, the cell phone companies said their lobbying group, the Cellular Telecommunications Industry Association, was responsible for the action. But the lobbying group says it doesn’t actually regulate text traffic, it just sets the standards for doing so.

Meanwhile, another scapegoat comes in the form of Zipwhip, a third-party spam screener that T-Mobile says it uses to mitigate spam texts. Zipwhip is keeping its lips sealed, though — the company wouldn’t even confirm whether or not it worked for any of the major cell carriers.

The company was, however, vehement in its thoughts on blocking spam. Keena Bean, Zipwhip's communications director, said, "Zipwhip's compliance process requires all texting traffic to follow industry-standard guidelines, including where appropriate, a requirement to obtain consent from the message recipient. The goal of the industry standard is to protect consumers from receiving unwanted messages and spam and maintain trust in texting as a communications medium."

Hypocrisy at the issue’s core — The Trump campaign claims this is an issue of free speech and its ability to reach voters. But in other instances, the Trump campaign has been clear in its messaging that spam is bad — just last year Trump signed a new law that raises the penalties for violating federal robocall and spamming laws.

Trump doesn’t believe everyone should have the ability to send mass texts to cell phone users — just that he should be able to do so. In any other circumstance, industry watchdogs and the companies themselves would’ve blocked any campaign to send non-consensual text messages.

But, as usual, Trump’s camp believes it deserves an exception to the rule.

More like this
Matt Wille
8 hours ago
Culture
Trump isn't allowed to post content unless it's hit Truth Social first
Will Gendron
5.12.2022 12:00 PM
Yikes
El Salvador's bet on bitcoin has been as volatile as expected
Andrew Paul
5.11.2022 7:50 PM
Iconic
This summer’s vibe is a $400K Zillow listing collapsing into the ocean