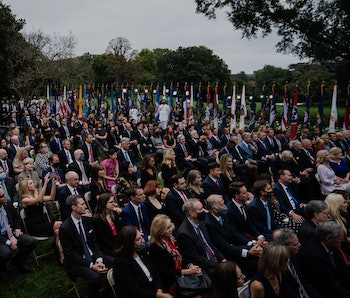 Despite all signs pointing to the gathering for Judge Amy Barrett’s Supreme Court nomination being a super spreader event, the White House has done a lackluster job at contact tracing following a wave of COVID-19 cases. Reporting by The New York Times and NBC News shows that, in addition to leaving the CDC out of the loop, the White House has offered limited help to local health officials in New Jersey, Minnesota, and Washington D.C.

Contact tracing efforts have largely been limited to names and email addresses, and lists of potentially exposed people are rarely shared at all. The sole external list excluded event staff because they weren’t deemed as having enough contact with Donald Trump and his inner circle.

Their emails though — The White House is strictly following a CDC guideline regarding contact tracing within the two-day period before a positive test while not actually letting anyone from the organization help with tracing the spread of COVID-19 infections. A team from the CDC has been on standby to assist since Friday, but the White House still hasn’t reached out.

Instead, contact tracing efforts have relied heavily on email addresses — as opposed to phone calls which also provide people with valuable information about symptoms and when to start isolating. Whether it’s emails or apps, tech hasn’t been the virus tracking savior the world expected. Investigators in Iceland haven’t really used Google and Apple’s contact tracing app without supplementing human phone calls.

The New Jersey Department of Health received a list of 206 attendees to a Trump fundraiser from the Republican National Committee (RNC) that only provided email addresses. No phone numbers, nor city and state information, were available despite some guests having traveled across the country. The list also excluded staff at the event because they didn’t spend more than 15 minutes in close proximity to Trump and affected members of his traveling party.

Even within the White House, information is scant. Sources told the NYT that an internal memo was sent out on Sunday telling staff to stay home if they're experiencing symptoms. They were encouraged to reach out to their personal physicians and to not inquire about testing at the White House Medical Unit clinic. Even if staff managed to snag a test, the White House has notoriously used rapid tests with significant rates of error.

It gets worse — Health officials in Minnesota and Washington D.C. haven’t received any lists at all. The Minnesota Health Department has neither requested a list nor received any contact from the White House regarding a maskless rally Trump held in the state last week.

D.C.’s Department of Health, however, has reached out, but as of Monday did not even have a list of people who tested positive. The White House is basically free to operate a bit like the Vatican here, but with many members of political and service staff as well as journalists living in D.C., local officials need more information to keep its residents safe.

“It’s not just the 400 people that work in the White House. It’s their families that they go home to, it’s who they may have been in contact with, their children,” Dr. Joshua Barocas, a public health expert at Boston University, told the NYT. “The need for extensive contact tracing, if for no other reason than to protect vulnerable communities that are second or third-degree removed, is massively important.”