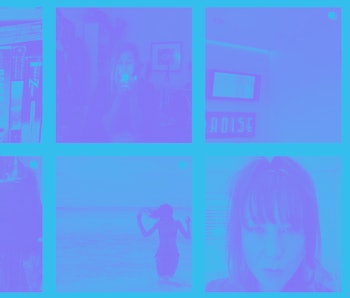 Thea-Mai Baumann, an Australian artist, has posted on Instagram since 2012 using the handle @metaverse. Like many, many people, she uses the app to document bits and pieces of her life: her travels, artwork, a neighborhood cat. When she named her account, the term “metaverse” had little use outside of the 1992 science fiction novel Snow Crash, where it referred to a 3D virtual space in which the protagonist would immerse himself.

A decade ago, when Baumann created the account, her handle @metaverse wasn’t a vague Silicon Valley buzzword touted by techno-optimists and tech giants. In 2012, “metaverse” received less than 1 percent of the Google searches it gets now. But on October 28 of this year, Mark Zuckerberg announced at the company’s Connect virtual reality conference that Facebook would change its name to Meta and pour $10 billion into building the so-called metaverse. Five days after the announcement, Thea-Main Baumann lost access to her Instagram account.

The login screen simply read: “Your account has been blocked for pretending to be someone else.” There had been no warning, no real explanation, and no way to effectively report the issue, Baumann told The New York Times.

Handle scandal — Baumann appealed to Instagram to restore her account but was met with crickets. She reached out to an intellectual property lawyer but couldn’t afford their full services. Finally, when The New York Times joined her efforts, an Instagram spokesperson responded to her, saying the account was “incorrectly removed for impersonation” and would soon be back. Two days later, the David and Goliath fight was over. Thea-Mai Baumann had @metaverse back.

“This account is a decade of my life and work. I didn't want my contribution to the metaverse to be wiped from the internet,” Baumann told NYT.

More like meta-averse — At face value, Instagram made a mistake and fixed it. But the incident illustrates the dangers that arise when a small number of corporate giants control much of our experience on the web, from the feeds we view to the accounts we think we own.

Instagram already has an issue with account banning and seemingly-random censorship, leading some users to create backup accounts so followers know where to find them in case their platform is removed. Buzzfeed News reported on the desperate measures to which creators have gone to get their accounts back, and an art project called "Deleted in 2020" (NSFW) displays user-submitted images that Instagram deleted due to apparent violations (some images are indeed problematic and others are utterly benign).

There’s reason to believe that the internet oligarchy won’t go away anytime soon. The fully-realized metaverse, according to Web3 evangelists, will be decentralized— a place that no single person or entity can control, and where “interoperability” will allow users to more seamlessly navigate independent programs, such as using avatars for everything. “The metaverse will not be created by one company,” said Zuckerberg himself.

But the same companies that dominate the internet today are the ones investing in the Metaverse, trying to control (and monetize) as much of it as they can. As the username incident shows, Meta can evict a user from its platforms with little accountability or explanation — exercising its power to make an inconvenient user disappear. That’s unlikely to change in the metaverse.