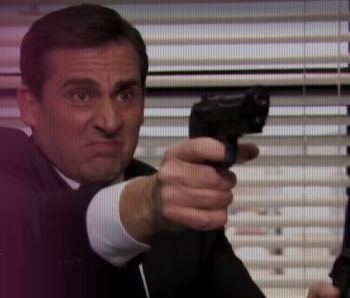 Threat Level Midnight. Titanic II. Angels with Filthy Souls. All movies that don’t exist but really, really should. Although we’ll probably never see our hopes come to fruition (exempting at least some of Threat Level Midnight) a new website is working to provide an impressively meta, thorough archive of all of pop culture’s fake, faux, and forged movies and television shows glimpsed or referenced in real titles.

Welcome to Nestflix — a great time-waster of a site featuring a consistently expanding catalog of nonexistent releases found in actual films and TV. Created by designer Lynn Fisher, Nestflix is pretty self-explanatory, we suppose, but it doesn’t make the idea any less ingenious or enjoyable. Visitors can browse through a suspiciously familiar user interface for all manner of never-made titles, and each selection includes a brief description, cast, as well as the original, actual movie or show in which it appears. Fisher summed up the project as “just a wiki doing some cosplay,” which, while succinct, fails to capture the website’s ingeniousness.

Head over to Nestflix to peruse the unfortunately false entries (well, not all of them are unfortunate... we’re looking at you, Simple Jack), and if you think of any that are missing, be sure to submit them through the site’s contact page.

Still more attractive than other, real streaming services — Despite the fact that Nestflix’s whole deal is based on, y’know, not real things, it’s still more entertaining than some of the other options we’ve seen in recent months. CNN announced its own service last month called (you guessed it) CNN+ that is slated to launch early next year... and we remain unconvinced there are more than a dozen people who would actually be interested in such an option. And to be honest, we’re not sure anyone is rushing to give a Cuomo any more money than they absolutely have to these days.

Back in June, Facebook similarly unveiled a podcasting streaming feature that’s now available on its platform, an addition that feels a bit late to the game now that Apple and Spotify have solidified their hold on the market. And, lest we forget, there was Quibi for a very brief moment in time. Meanwhile, there’s the ever-present monolith of Disney+ looming over essentially all of the other competition — seriously, 100 million subscribers already? WandaVision was good, but it wasn’t that good, was it?