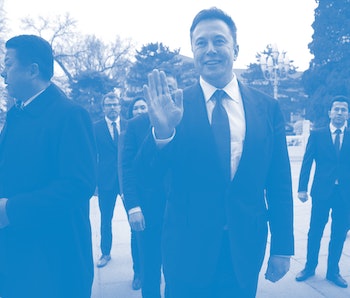 Elon Musk, Technoking of Tesla and all-around jokester, is very, very rich. Not quite as rich as Amazon CEO Jeff Bezos, but we’re still talking 12-digit net worth here. At those levels, it’s basically impossible for the average human brain to compute just how much spending power Musk would have if he cashed in all his stock options and called it a day — but creative internet coding makes it at least a little easier to wrap our tiny, mammalian brains around.

Nino Trivelli, an Italian web designer, made a simulator called “Spend Elon Musk’s Fortune” that might help. Or at the very least make you pretty angry. The site is exactly what it sounds like: You have $164 billion to spend however you’d like. Add items to your cart — everything from a Nintendo Switch to a mega-yacht — and see just how far your money would stretch if you happened to be the CEO of the world’s most valuable car company.

Let's go shopping — Ah, the sweet smell of capitalism. Being rich seems pretty easy; all you have to do is buy whatever your heart desires and make sure none of your revenue goes toward the people who need it the most.

In just a few minutes, I did some pretty hefty damage to Elon Musk’s wallet. Here’s what I ended up purchasing:

By this point, I was pretty exhausted from all my spending. To my (not-so-great) surprise, Trivelli’s site told me I’d only spent about 2.24 percent of my riches. I’d left about $160.3 billion in my savings account. After buying a mega-yacht and a Hollywood movie and an entire NBA team? Totally normal, sure.

So… what now? — The enormous wealth of the tech elite isn’t new, but it is certainly becoming more noticeable as the zeroes rack up. Elon Musk is both the problem itself and a symptom of some much larger issues, especially around how billionaires dodge taxes. It’s public knowledge, in 2021, that tech giants utilize tax loopholes at every opportunity to maximize their profits and minimize the help they return to the government — and yet those loopholes are still very open.

If there’s any good news to be gleaned on this front, it’s that prominent lawmakers like Elizabeth Warren are proposing tax hikes for the ultra-wealthy. These bills are nowhere near guaranteed to pass, but they’ve gained much more traction than similar efforts in the past.

Of course, Elon Musk could always go ahead and donate some of his fortune to any of the many, many communities and individuals in need of funds. But apparently, that’s “way harder than it seems.”