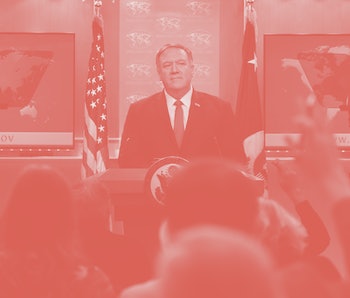 The United States is considering a full ban of TikTok and other Chinese social media apps at the federal level, Secretary of State Mike Pompeo said Monday.

“With respect to Chinese apps on people’s cell phones, I can assure you the United States will get this one right too,” Pompeo said in an interview with Fox News. “I don’t want to get out in front of the President, but it’s something we’re looking at.”

Pompeo said also that users should only download TikTok “if you want your private information in the hands of the Chinese Communist Party.”

Fear around TikTok’s Chinese roots is nothing new. However, despite a handful of ongoing investigations, no hard evidence has been brought against the app or ByteDance, its Beijing-based creator. But tensions between the U.S. and China are high enough right now that the ban might just make it through anyway. This week TikTok pulled out of Hong Kong, while Google, Facebook, and Twitter have said they intend to refuse data requests for the region they receive from Chinese law enforcement agencies.

What TikTok says — TikTok is, as always, reticent about sharing anything more than a brief statement to back itself up.

“TikTok is led by an American CEO, with hundreds of employees and key leaders across safety, security, product, and public policy here in the U.S.,” a TikTok spokesperson says in response to Pompeo’s comments. “We have no higher priority than promoting a safe and secure app experience for our users. We have never provided user data to the Chinese government, nor would we do so if asked.”

What’s the deal with TikTok security? — Here’s the problem: we’re not really sure what to make of how TikTok treats user data. The company has time and time again stated that it doesn’t share any user data with the Chinese government, but security experts aren’t convinced, with some claiming its effectively a giant data-mining service masquerading as a video-sharing site.

The problem is that TikTok isn’t backing up its claims with much transparency. Though the company has released one transparency report, it was pretty bare-bones and didn’t do much to quell security concerns.

China? Never heard of her — TikTok has been working overtime to separate its business from the messiness between its home country and the U.S.

In this effort, TikTok has set up convoluted location-based developer restrictions and attempted to change — more than once — where the company is headquartered.

TikTok is going to need to do more damage control than simply repeating bland statements about its commitment to security if it wants to continue its app store domination around the world. It’s already been banned in India — now the U.S. is considering following suit. As tensions between China and the U.S. continue to mount, it’s going to take a lot more openness for TikTok to make it through the year in one of its top markets.