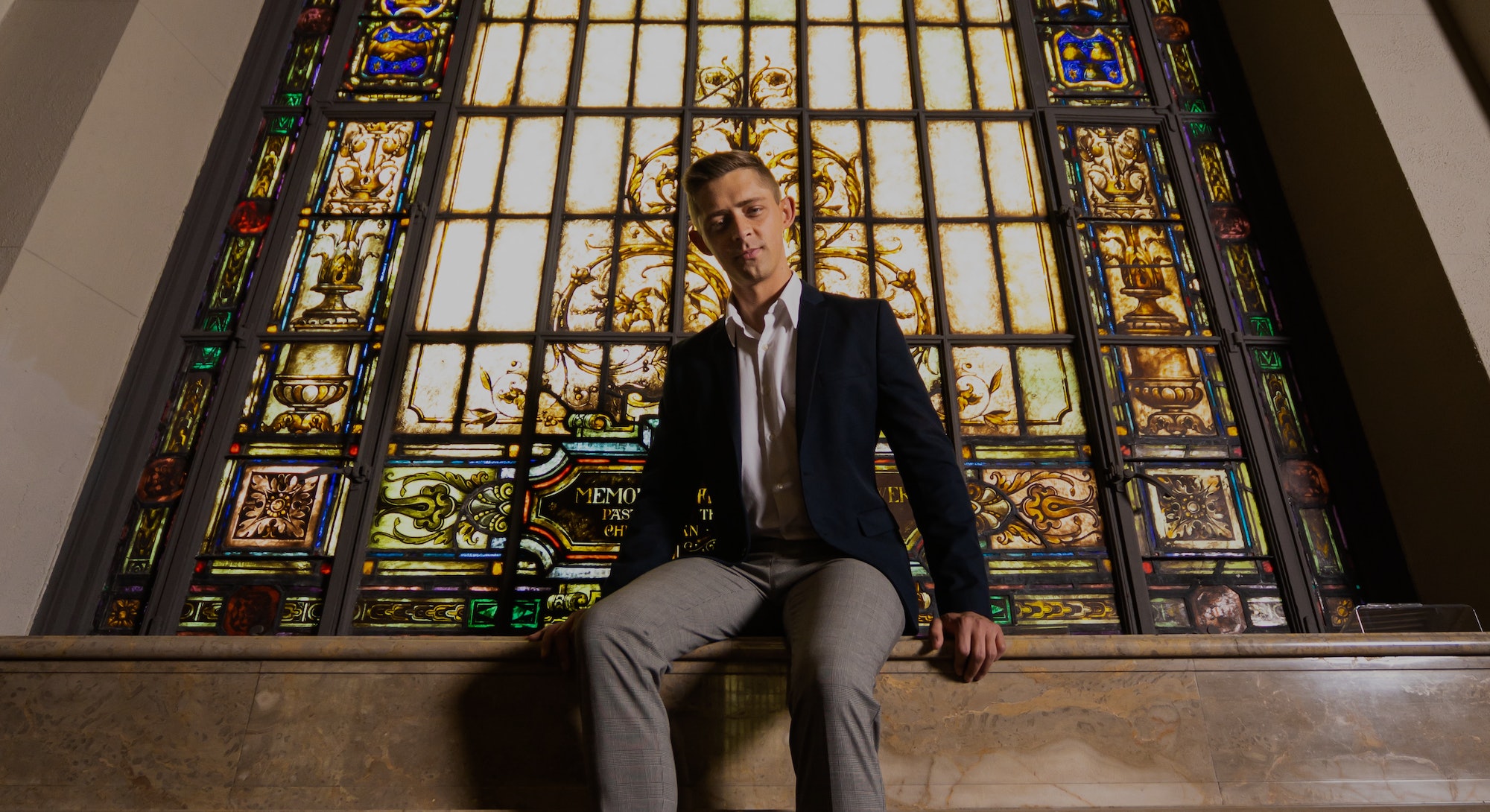 Brandan Robertson, a 29-year-old from Washington, D.C., is not the kind of advocate most people picture when they think of the pro-choice movement.

But on Tuesday evening, after the leak of a draft majority opinion from the U.S. Supreme Court that would overturn Roe v. Wade, he donned his blue clergy collar, and stood shoulder-to-shoulder with other protesters outside the Supreme Court building.

Robertson, an author, activist, and lead pastor of “digital progressive faith community” Metanoia Church, hadn’t always been the type to attend such events. Throughout his teens and early twenties, he was heavily involved with the conservative evangelical scene and self-identified as an anti-gay, anti-abortion fundamentalist.

It wasn’t until he attended the Moody Bible Institute in Chicago, where his theology collided with IRL interaction with people he’d been taught to hate, that he changed his ways — and began to confront his own sexuality. After a failed attempt at conversion therapy that was forced on him by his church, he discovered the progressive faith world, came out as gay, and got a degree from a liberal seminary. His entire world changed.

He is now avowedly pro-choice, a stance he often discusses on his @revbrandanrobertson TikTok account, which has more than 188,000 followers. “When the draft ruling came out this week, I felt compelled to use my position as somebody who can code switch between evangelicalism and progressive people of faith to spark conversation,” says Robertson. He posted this video, which has more than 61,000 views, on the platform yesterday:

“Evangelicals and conservative Christians don’t own the religious narrative,” he adds. “I want people to know there are other faith voices and traditions out there that are pro-choice and pro-women’s rights.”

Robertson is one of several Christian pastors who have taken to TikTok to educate the masses on a more liberal version of their faith. Together, these clergymen are working to change the narrative of the religious abortion debate — often by quoting the Bible — in a bid to make those who are “pro-life” think twice about their views. The Supreme Court’s leaked draft decision has only energized them.

Adam Ericksen, a 43-year-old tattooed pastor at Clackamas United Church of Christ in Oregon, who has delivered sermons professionally for the last 15 years, saw TikTok as an opportunity to reframe the Bible in a “loving” way to a larger audience. He started out doing one-minute clips about God and the gospel on his @adamericksen1 account, which now has more than 170,000 followers. He’s sinced moved on to delivering pro-LGBTQ and pro-choice mini-sermons on the platform.

Ericksen’s work is largely fueled by personal relationships. “I’ve had women in my life who I love who’ve had abortions. Many of them did it for economic reasons — and they’ve all been demonized by people who identify as Christians and had to walk through picket lines as they go to clinics,” he says. “So I’ve made it part of my mission to make sure those women know they are not alone — that a Christian minister is with them and cares about people with uteruses.”

Robertson says he’s been motivated by his past. “When I was a part of the pro-life movement, I realized it wasn’t actually about abortion. It was about rallying people around extreme images that aren’t accurate, and using that fear to motivate them politically, to do other things,” he says.

“The Southern Baptist convention released a resolution that supported Roe v. Wade in 1971, and reversed the decision a few years later,” he continues. “It’s not because Southern Baptists had this drastic moral awakening. Abortion was used as a weapon to divide the country and to gain political power.”

He believes most people who oppose abortion are being misled by these political campaigns. “I think these are people of goodwill who actually care about babies, but they’ve been removed from the scientific context of what abortion is,” he says.

Robertson points to statistics and historical data, which show there are fewer abortions when more progressive policies, like sex education to prevent teen pregnancies and financial aid for families, are in place. “We all want to see this abortion decrease,” he says. “But the way [conservative Christians] go about it doesn’t help the goal that we all want. You’re actually harming people in the process by blocking them from proper healthcare.”

TikTok pastors understand that those who are opposed to abortion are far removed from the scientific realities of the procedure — so they’ve been appealing to them on TikTok with Christian teachings instead.

“Anyone who uses ‘Thou shalt not kill’ as a command against abortion is missing the fact that the Bible never once says life begins at conception. It really never speaks directly to it,” says pastor Paul Swearengin, a 56-year-old former sportscaster and current life coach who has worked in church leadership for the last 25 years. “Besides, hundreds of verses say we’re commanded to take care of the poor and the marginalized.”

In the wake of the Roe v. Wade draft decision leak, Swearengin has posted videos that outline the absence of abortion from the Bible and highlight the racist roots of anti-abortion extremism to his account, @pastorpaul_tiktok, which has more than 104,000 followers.

Ericksen has also scoured the Bible for takes on abortion. “Ancient Judaism always supported the right for a woman to have an abortion, and that’s where the Bible comes from,” he says. Ericksen has outlined these points in his TikTok mini-series on abortion, a 15-part pro-choice playlist that has amassed over 3 million views.

Like Swearengin, he also points to the hypocrisy of politically motivated interpretations of the Bible. “The Bible is full of God commanding murder against innocent people. There are passages where it says if you have a rebellious son, you should kill him,” he says. “Finding our morals directly from the Bible when it comes to these topics is problematic.”

Given the fiery debate over abortion rights, these TikTok pastors have run into resistance. “I’ve gotten death threats in the past from conservative groups, saying they know where I live and things like that. But it’s such an extreme issue that vitriol is expected any time a progressive minister opens their mouth,” says Robertson.

Overall, he’s thankful for the opportunities that come from speaking out — like debates he’s participated in on conservative Christian TV shows and the one-on-one DM sessions he gets into with angry TikTokers. “There are great opportunities for dialogue that have opened up [because of my videos],” he says, “and I’m hopeful that as progressive voices are heard, we will slowly begin to chip away at the idea that you have to oppose abortion to be a person of faith in this country.”

Ericksen also refuses to let the haters get to him. “Some people border on on being haters and trolls and stuff, but they’re not my audience. I’m not here for them — I’m here for the people who have had to make this really hard decision and need someone to tell them they are loved,” he says.

He’s fighting this campaign IRL, too, and was thrilled when his church backed him on putting up a message in support of Roe v. Wade on the marquee board in front of the building.

Of course, these pro-choice pastors can reach far more people on TikTok than they can with a sign. “My mantra is ‘God’s not mad at you.’ I want people to know that God is not mad at them for caring about a pregnant woman. We need to quit demonizing women and healthcare providers for doing it,” says Swearengin. “I see the millennials and Gen Zs. Their heart for spirituality is, in many ways, bigger and purer than our previous generations. My hope is, as a pastor, to give them permission to pursue that spiritual life.”

Robertson says that pro-choice advocates should defend the rights of people with uteruses “in a way that doesn’t just write off every pro-life young person on TikTok as irredeemable.”

“A lot of the far-right young people have never actually heard a Christian pastor articulate a pro-choice argument,” he continues. “They only hear this demonized image of what that looks like. And I went to be a face that says, ‘Actually, I’m a pro-choice Christian pastor — and it's not scary and dramatic at all.’”