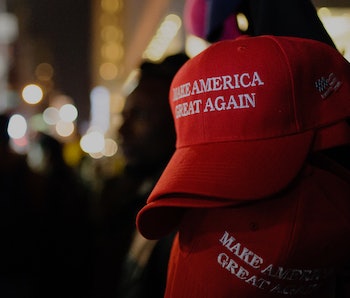 The TikTok pranksters are continuing their crusade against the Trump campaign. After last week submitting bogus, bulk RSVPs for the President's rally in Tulsa, Oklahoma, the TikTokkers are now going after Trump's online store.

New videos have circulated on TikTok encouraging people to head to Trump's official online store, fill their virtual shopping baskets with "Keep America Great" ugly sweaters and other sartorial sins, and then abandon them.

The hope is that, like many e-commerce websites, the Trump campaign will spend money retargeting these "shoppers" on social media with messages enticing them to complete their purchases. An added bonus is that abandoned online shopping carts can affect inventory systems, costing digital retailers in the process.

Playing creepy ad tracking against itself — Companies often have budgets retargeting, as an estimated 70 percent of shoppers abandon their carts before checkout — maybe they're still on the fence about buying those Nike's, or maybe the coronavirus — which could've been fading away if the current administration's response to it had involved more decisive action and less sticking of heads into sand — has people tightening their belts.

Retargeting shoppers — sometimes with extra discounts — can sometimes be the final push needed to bring them back to the website to complete their purchase. Adding items to a cart is typically a strong indicator of interest, so the extra marketing spend is usually a sensible expense. But, in this case, since the TikTokkers have no intention of actually buying Trump merchandise, the money spent trying to convince them to follow through on their purchase would just be wasted spend for the campaign.

Even if a person doesn't add anything to their cart at all, the proliferation of cookies and web trackers that follow visitors around the web means even merely visiting the Trump online store can trigger the campaign to spend money targeting those same people across social media. In large numbers, this behavior could squander plenty of Trump's money. The only downside? Google, Facebook, and other purveyors of online ads are going to reap the rewards. Still, sometimes one has to choose the lesser of the evils.

Clever, but probably a mere nuisance — Adweek spoke to experts in the advertising industry who noted that this type of manipulation will likely only work for a brief period. Once 95 percent of carts on an e-commerce site are abandoned, it ceases to be a strong indicator of interest and sites adjust accordingly. The Trump campaign will likely quickly recognize and account for the anomalous activity and cut off retargeting... at least temporarily.

Still, it's a clever prank that should nonetheless annoy the campaign without causing any real harm to anyone. And it shows that TikTokkers have a sophisticated understanding of internet advertising and shouldn't be underestimated. Also, it's pretty darn funny.

Some have criticized the TikTokkers for conducting information warfare against the Trump campaign, comparing the behavior to fraudulent Russian networks flooding social media with divisive messages in an attempt to sow discord in America. But, umm, that just sounds like they're using the same tools as those in power against them. Which is pretty poetic.