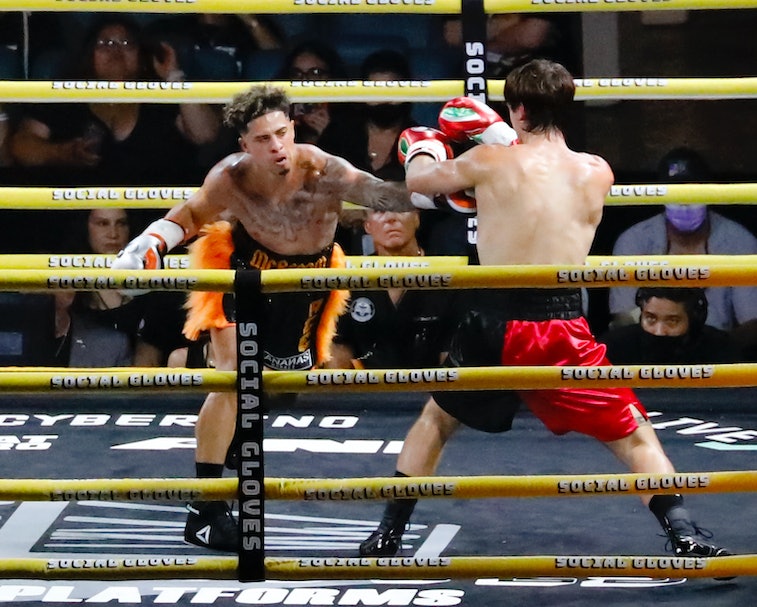 Internet influencers so desperate for viral fame that they’ll literally take a beating for some extra followers haven’t gotten paid what they said they were promised, according to a recent report from Business Insider. Last month, 12 stars from YouTube and TikTok converged at Miami’s Hard Rock Stadium for “Social Gloves,” a boxing event billed as a beef-settling brawl between the two platforms’ various self-concocted dramas.

"You have to have a reason to get in the ring. Some of the kids said it was money, and it definitely is money,” Rob Ellin, CEO at Social Gloves’ production-promotion company, LiveXLive, straight-up told Business Insider back in May before adding, “But you can hear in the dialogue between them [that] there really is a beef between TikTok and YouTube." Sure thing, Rob.

In any case, some of those still nursing actual wounds from June 12’s event apparently haven’t received their checks. TikTok’s Vinnie Hacker (ew) recently informed Barstool Sports’ Dave Portnoy (ewww) that he had yet to be paid for his fight against YouTuber, Deji. One of the show’s commentators also confirmed to Insider that he is also missing previously promised compensation. Yikes.

Passing bucks not dishing them out — LiveXLive president, Dermot McCormack, has since passed the buck off to Social Gloves Entertainment and a separate company, Simply Greatness Productions, which allegedly handled all participants’ contracts. Similarly, a LiveXLive spokesperson recently stated Simply Greatness “does not have sufficient funds to make good on its contractual commitments.”

In other news, LiveXLive announced an all-female Social Gloves event last week... implying at least somebody out there is definitely getting paid.

The ACE Family at the center of it all — A cursory look into Simply Greatness Productions only adds the entire debacle’s sketchiness. Insider explains that legal filings link a company called Ace Hat Collection to the “Social Gloves” trademark... which just so happens to be owned by Austin McBroom of immensely popular The ACE Family YouTube channel. McBroom also co-headlined Social Gloves’ top bill fight against Bryce Hall, and has not yet publicly commented on his company’s failure to pay event contenders.

The toxic TikTok ecosystem continues to flourish — Outside of third-party events like Social Gloves, the internet influencer industry is chugging along as profitably and toxically as ever. Recently, TikTok announced a paid, Cameo-like feature for influencer shoutouts, while a controversial-but-booming subcommunity surrounding Dissociative Identity Disorder is having its own limelight moment, complete with doubters and haters questioning its legitimacy, of course. It’s almost as though funneling millions of dollars into the bank accounts of teens with little accountability is a terrible idea.