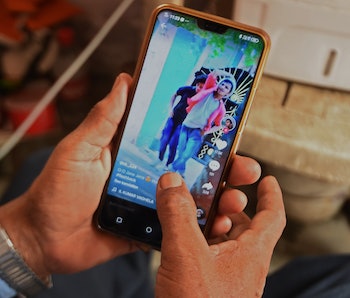 A mass outage on TikTok has sent its users into chaos mode, which has spilled over to Twitter and other social media networks. The issue comes in the middle of a controversy over Neo-Nazi death-camp jokes that have been found on its platform and were removed this week.

On Thursday afternoon, the short video clip app seemed to have undergone a full reset to zero. TikTok users reported that their videos lost all likes and views, and were displaying virtually zero hits on their end. The outage tracker Down Detector noted that there were at least 20,000 reports of users indicating that their video metrics had been reset without explanation from the company.

On Twitter, TikTok acknowledged that there had been an issue. "We're aware that some users are experiencing app issues," the company tweeted and added that it was "working to quickly fix things, and we'll share updates here."

TikTok down, theories up — TikTok is insanely popular with the Generation Z crowd, and as soon as the app experienced its full reset, TikTok users turned to Twitter to offer their ideas about what went down. Within seconds, the hashtag #TikTokBan took off with countless Twitter users sharing their theories that the app had been banned by Donald Trump as a message to China.

The Trump administration has repeatedly dubbed TikTok a "national security threat" but officials have not yet moved toward a full ban on the platform. Still, speculation seemed more than enough to send TikTok users over the edge. Here's a clip of the full reset which shows zero likes and views while comments remain.

A ban or a glitch? — The app, which is set to boast 52.5 million users and frequently acts as the epicenter of cringe, has been an area of interest and scrutiny for the Department of Homeland Security's Cybersecurity and Infrastructure Security Agency.

Federal security officials have viewed TikTok as a potential source of political disinformation, not too different than how officials view Facebook as a hub of false advertising and more. A statement from the National Security Agency in March didn't name TikTok specifically as a threat but it did note that "foreign actors" could "try to influence public sentiment and shape voter perceptions."

So, this isn't to completely write off TikTok users' concerns that the Trump administration could be moving toward banning the platform in the United States. After all, there is a precedent straight from India, which banned TikTok recently among other apps. But this particular reset is more likely a glitch than it is a full ban. For now.