“If we accept as normal and unavoidable that everything in our lives can be aggregated and sold, then we lose so much more than data. We lose the freedom to be human.” 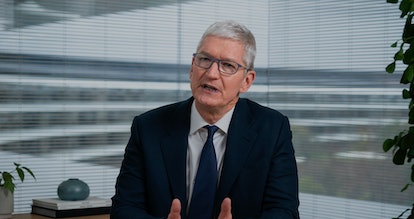 Apple CEO Tim Cook decided to indulge in the art of subtle jabs during a speech presented at the International Data Privacy Day virtual panel. Amid rows with Facebook over its data privacy policies and a brewing lawsuit, Cook restated his support for Apple's emerging privacy upgrades for iOS 14 apps.

"As I've said before," Cook stated, "if we accept as normal and unavoidable that everything in our lives can be aggregated and sold, then we lose so much more than data. We lose the freedom to be human."

"And that all of this," he said, "always, puts privacy and security first, because no one needs to trade away the rights of their users to deliver a great product." That's gotta hurt, Facebook.

Cook puts Facebook on blast — In the past few months, Facebook has taken significant issue with Apple's new privacy feature, which is called App Tracking Transparency. Apple is trying to create more robust and reliable privacy policies that let users know exactly when they're being monitored by an app. Most critically, Apple will let users block web tracking if they want to.

Facebook disapproves of this move, claiming that it would hurt "small businesses" but more realistically, the company is worried about its own standing as far advertising content, tracking, and profit goes. Cook mentioned App Tracking Transparency in his speech as well.

"Users have asked for this feature for a long time," he said. "We have worked closely with developers to give them the time and resources to implement it. And we’re passionate about it because we think it has the great potential to make things better for everybody."

"Technology does not need vast troves of personal data, stitched together across dozens of websites and apps, in order to succeed. Advertising existed and thrived for decades without it. And we’re here today because the path of least resistance is rarely the path of wisdom," Cook added. "If a business is built on misleading users, on data exploitation, on choices that are no choices at all, then it does not deserve our praise. It deserves reform." Emphasis ours.

Cook's firm isn't enhancing privacy features for selfless reasons. It is most likely doing so to win consumers over to the Apple side, even if it ends up hurting Facebook, Google, and other competitors. But the angle Cook has taken — user privacy and even dignity — is a valuable one. And no amount of crying about anti-competition is going to thwart Apple's case.