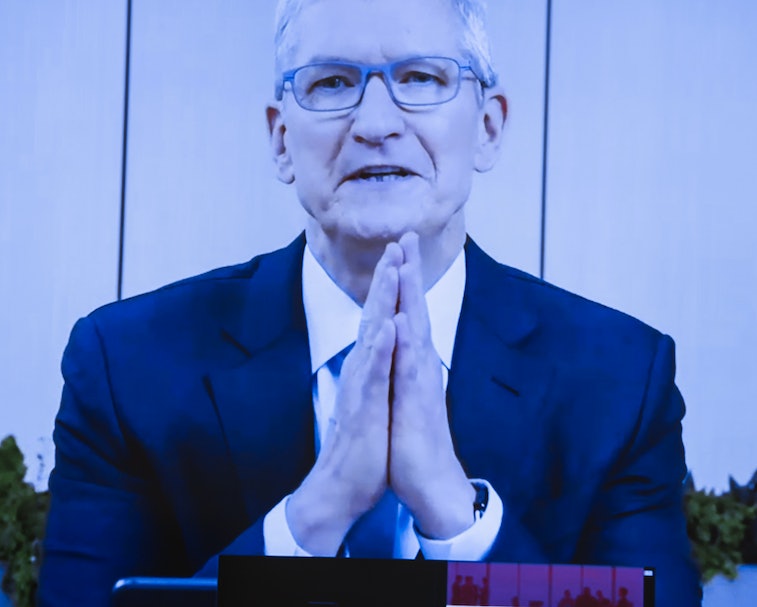 Though the headlines have slowed down significantly, Apple and Epic Games are still locked in a massive legal battle. The companies are set to appear in court for a full trial beginning in May — and Apple CEO Tim Cook is going to sit through it whether he wants to or not.

Epic Games requested an eight-hour deposition from Cook, according to court documents reviewed by Gizmodo, and Apple tried to get Cook out of it by falling back on something called the "apex-deposition doctrine". The apex doctrine essentially allows a court to block the requested deposition of a high-ranking company official on the basis that the official doesn’t have first-hand knowledge of the subject matter.

The court refused Apple’s petition — and still Apple continued bargaining so it wouldn’t be forced to put its highest-ranking executive on the stand. Though the now-mandatory deposition isn’t exactly a win for Epic, it is something of a loss for Apple. The company obviously didn’t want to deal with the preparations necessary. But now a federal judge has ordered Apple to do just that. For seven hours, at least, Tim Cook will be deposed by the federal court system.

Apple put up a fight — Apple’s hope was that, in evoking the apex doctrine, the federal judge would decline Epic’s deposition request outright. And in the case that the judge refused that, Apple said it would concede Cook’s deposition at a limit of just four hours — half of Epic’s requested time.

In his discussion of the deposition, federal judge Thomas S. Hixon said the answer to how long Cook should be deposed is one of practicality. He eventually settled on seven hours for Cook’s mandatory deposition based on the fact that Cook does actually have intimate knowledge of the situation.

“The facts of the case go way beyond the historical facts of what happened and when,” Hixon says. “These cases challenge an important aspect of Apple’s business model — the closed, integrated App Store and its policies and commission structure — and the parties are fighting about the relationship between different markets … and the extent to which competition in some of those markets restrains behavior in others.”

Hixon concludes that, with this being the bedrock of the case at hand, there’s really “no one like Apple’s CEO” who can testify on these core principles. He decided upon seven hours because it’s the “default rule for how long a witness must suffer being deposed.”

And so the war continues — The case between Epic Games and Apple is shaping up to be one of, well, epic proportions. The action itself has died down for now as we await the companies’ full trial, and in the wake of that action, we’re left with lots of petty, passive-aggressive attempts to weaken the other’s position.

Epic partnered with Apple rival Samsung at the end of last year, for instance, to send gamers swag with the slogan “Free Fortnite” written on it. Apple actually requested a subpoena into Samsung’s internal documents to interrogate the company’s relationship with Epic — hoping to prove Samsung’s policies align with Apple’s own on the App Store — but Hixon denied this request outright, calling it a “quirky deep dive.”

This case could have effects far broader than simply Epic’s revenue stream. For now, though, we’ll have to be content with watching the frivolous back-and-forth until May.