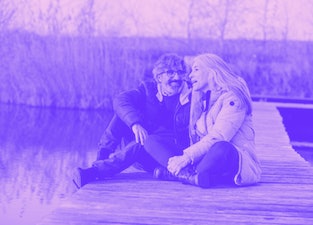 How much some older men are paying for tinder. Younger uses pay as little as $6.99.

Look, we all know Tinder is a (still terribly popular) trash app that encourages the worst forms of shallow, face-value judgments and beauty standards, but for extra horror, it appears the dating service is up-charging older men for its premium offerings — a revelation that’s about as unsurprising as it is depressing.

A 60-person “mystery shopper” study from the Australian-based consumer advocacy group, Choice, revealed that men over 50-years-old and living in urban areas were charged up to $34.37 a month for Tinder’s premium features, compared to prices ranging from $6.99 to $16.71 for under-30 users. Queer-identifying women under 30-years-old were charged the least, at $6.99 per month.

No disclosure — “Nowhere on Tinder's website, privacy policy, or in its terms and conditions does the company say that it will charge you a different price based on your personal data," Choice’s Director of Campaigns and Communications, Erin Turner, told ABC News Australia.

Choice announced it had already filed a formal complaint with the Australian Competition and Consumer Commission against Twitter for “potential breaches of the Australian Consumer Law (ACL),” but this isn’t the first time the dating app has come under scrutiny for potentially discriminatory consumer strategies and price differentials. Tinder has faced multiple legal battles over their pricing policies, most recently settling a suit out-of-court just last year for similar accusations.

“In many cases the [price discrimination] is lawful, but it may be unlawful if it's based on unjust or prejudicial treatment of different groups of people, which is what an appeal court in California decided Tinder was doing,” says an article published on Choice’s website yesterday.

Selling your dating data— Atop basic leveraging of age and emotion to jack up prices, there’s an entirely different set of problems that come with Choice’s findings: big data utilization. Without knowing it, Tinder users’ information and data sets could easily be sold to further price discrimination in other markets, since (among many other things) the company now knows just how much certain populations will shell out for their products as opposed to others.

We're thrilled that, for a change, queer-identifying women are getting the best part of a deal that involves money. But we're sorry it's for something as depressing as Tinder.