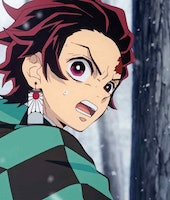 The amount of money made over two years from the (very well done) copycat cakes.

Japan is not screwing around when it comes to copyright law. As first reported by Kyodo News, Tokyo police in Shibuya recently arrested a 34-year-old woman for selling very impressively decorated cakes featuring characters and images from the hit anime / manga series, Demon Slayer, via Instagram.

Over the past two years, the amateur baker took orders on the social media platform for the desserts, and generally charged somewhere between $114 and $132 per cake, in all netting a whopping 6,500,000 yen (roughly $57,000) for the knock-off Demon Slayer sweets. According to our quick calculations, implies that she baked close to 500 cakes since 2019. To be fair, they look pretty darn good.

Not if, but when — As Kotaku notes, Demon Slayer is one of the most popular (and profitable) anime and manga series of all time, meaning that copyright infringement is extremely frowned upon by its production company and it was only a matter of time until it got involved.

That said, it is more than happy to license out the likenesses of its characters to businesses including coffee companies and even bakers going through the proper channels. Unfortunately, that wasn’t the case for the woman put in cuffs, who admitted she knew it wasn’t kosher from the get-go. “I thought if I made [the cakes] with popular anime characters, I could sell them... I knew it was a crime,” she reportedly explained.

Don’t tempt them — Between this and other recent arrests we’ve seen, it’s clear that Japanese law enforcement means serious business. Last month, for example, police arrested a man caught distributing de-pixelated pornographic videos using deepfake technology in violation of both copyright and national obscenity laws. According to reports at the time, the man made upwards of $96,000 for his time and efforts, proving true the old adage that sex most certainly sells... even more than cake, it would seem.