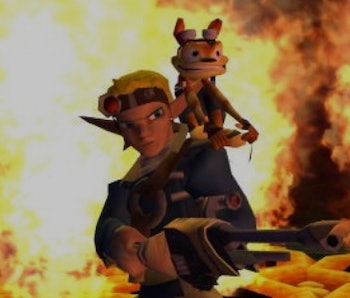 Tom Holland is in his pre-prime right now — the space where a young actor has widespread notoriety from starring in a blockbuster series but has yet to make the full plunge into a diverse set of roles. Holland first joined the Marvel Cinematic Universe when he was 19 and played the part of a young Peter Parker (Spider-Man) in Captain America: Civil War. A year later, the British actor reprised his role from Civil War in Spider-Man: Homecoming, which grossed close to $1 billion worldwide, and the rest was history.

Holland is now one of the biggest actors of his generation, even being paraded around at CES by Sony to promote the release of Uncharted (among other things), a movie adaption of the video game franchise in which he is set to star. As he makes his press runs to continue promoting the project, the British actor spoke to GameSpot to dish on his other dream video game adaptations.

It would seem Holland grew up on the PlayStation 2, at least based on his response. "I would do like a really weird, live-action version of Jak and Daxter," he told GameSpot, noting that he would want to play Jak. "I would make it at A24, so it was really weird and, like, dark," he added.

It’s worth pointing out that the iconic action-adventure series was developed by Naughty Dog, the company behind Uncharted and The Last of Us.

The age of the A24 reboot? — Throughout the late 2000s and extending into the 2010s, we saw a number of gritty reboots based on massively popular IP, like Christoper Nolan’s Batman movies and the Daniel Craig Bond films. Hearing Holland specifically mention A24 as part of a Jak and Daxter live-action film makes me think about what a strain of reboots from the popular production house might look like in the future.

There have already been a number of video game adaptations that have been more or less underwhelming — the most recent one that comes to mind is Resident Evil: Welcome to Raccoon City. Misfires like the Assassin's Creed film and Warcraft were similarly both unable to add interesting elements to the existing source material.

A24, known for slick, heavily stylized pictures like Uncut Gems and Hereditary would at least make a potential Jak and Daxter film look good. Whether or not the franchise would be elevated to new heights through a different medium is another question entirely.

Trying to mine a legitimately challenging film out of something like a goofy platformer would be the wrong approach, though. Instead, going all out on vibes could work a lot better — an A24 video game adaptation doesn’t need to lead to paradigm shifts, it should just capture a mood with colorful cinematography, memorable soundtracks, and someone like Tom Holland to do the heavy lifting.

I’m tired of the self-serious video game movie, just give me brooding neon colors and a Drake song to accompany a montage filled with dolly zooms. After all, this is Mega Man we’re talking about, not Pride and Prejudice.