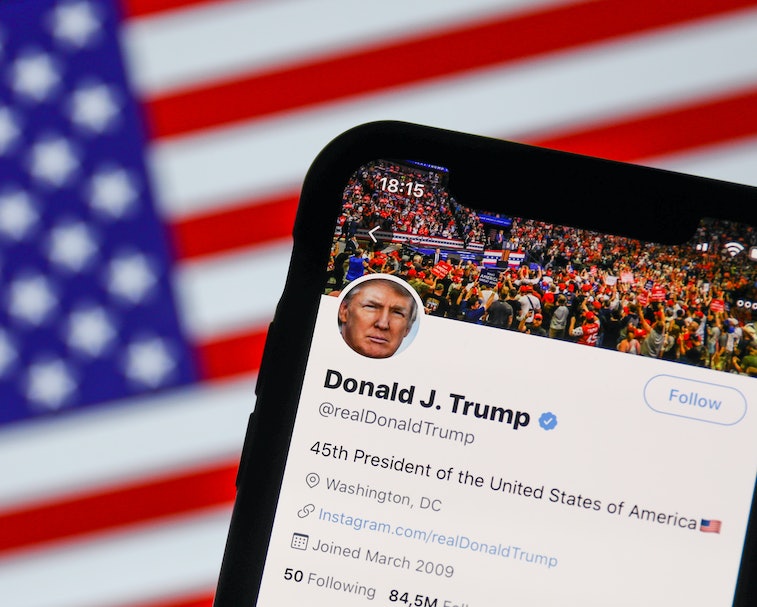 Donald Trump's vendetta against Twitter and other social media platforms is nothing new; the president often depicts himself as a noble martyr who endures endless transgressions at the hands of Big Tech. In his most recent and unsubstantiated complaint, Trump accused Twitter of promoting bad press about him on the platform.

On Thursday, the president tweeted:

Twitter makes sure that Trending on Twitter is anything bad, Fake or not, about President Donald Trump. So obvious what they are doing. Being studied now!

"Being studied now" is a good idea, as it's clear that Trump does not understand how Twitter's algorithm works. The network's method of promoting content is based on a default that checks what you follow, like, and where you're tweeting from. So, you're seeing a proximate result of those metrics — not some evil machine hand-selecting tweets to ruin your mood.

This won't end — This isn't the first time that Trump has accused tech of conservative bias. Last week, the president expressed his criticism against a rather innocuous meme about Senate Majority Leader Mitch McConnell. Trump tweeted, "Why does Twitter leave phony pictures like this up, but take down Republican [or] conservative pictures and statements that are true? Mitch must fight back and repeal Section 230, immediately. Stop biased Big Tech before they stop you."

Republicans have been trying to significantly weaken Section 230 of the Communications Decency Act of 1996. The provision stipulates that websites as speech mediums are legally sacrosanct and are not responsible for what is said on these sites when it comes to litigation matters.

For someone who positions himself as a hero for free speech, Trump has been one of the loudest supporters of tech censorship, often calling for outrightly unconstitutional shutdowns of these networks. In August, he similarly complained, "It’s never a real Twitter Trending. It’s Twitter Executive’s Choice. Only negative on Republican voices, especially mine!" That month, a Twitter representative explained to The Wrap that that's not how its algorithm works. "Trends are determined by an algorithm and, by default, are tailored for you based on who you follow, your interests, and location," the spokesperson explained. In other examples, Trump's tweet about mail-in voting received a fact-check label from Twitter.

With the 2020 presidential election fast approaching, you can expect the president's complaints against Twitter in specific and Big Tech in general to reach a higher, more histrionic pitch.