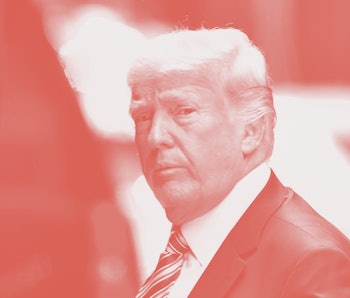 According to a deep dive report released today by The New York Times, Trump’s Department of Justice — a combination of words that somehow sounds even more obscene and contradictory the further removed we are from it — subpoenaed Apple for account data of multiple Democratic politicians, aides, and their families, one of whom was a minor.

Apple reportedly obliged, but could not inform Democrats and news outlets until recently because of a gag order that expired earlier this year. The gross abuse of judicial power was allegedly part of the King in Orange’s obsessive hunt to root out the myriad leakers within his own administration, as well as to stymie lawmakers’ investigations into Team Trump’s reported contacts with Russia.

A sordid history — First begun while Jeff Sessions (remember that corrupt Keebler Elf?) headed the DOJ, the particularly ridiculous use of taxpayer money turned up next to nothing... but efforts were revived once again after William P. Barr (the “P” stands for “perjury”) stepped in to lick Trump’s boots in the country’s highest position of prosecutorial power.

Prosecutors managed to also secure additional subpoenas for reporters’ data in the hopes of identifying their confidential sources, “a move that department policy allows only after all other avenues of inquiry are exhausted.” Obviously, they uncovered nothing of worth, so yeah... we don’t know what else to add to that pile of blazing horseshit other than to say that it’s probably no coincidence that Apple’s been boasting of its new privacy features in recent months.

At least we don’t have to hear Trump’s take — Despite news of the Trump administration’s latest egregious, unprecedented abuse of power, we can at least take solace in the fact that reach of the man’s online rants remains been blessedly curtailed. With Facebook upholding its ban on his access for at least another couple of years, not to mention the immensely enjoyable demise of his glorified Substack newsletter/blog, Trump’s only outlet for grievance these days are GOP fundraisers and his own little pep rallies. Sad!