"They cut you off whenever they want."

Trump, about why he won't participate in a virtual debate. 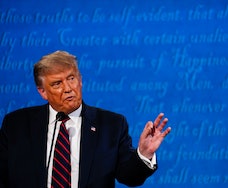 The Commission for Presidential Debates announced today that the next debate, scheduled for October 15, would be conducted virtually for safety reasons. But President Trump isn’t having any of it.

“I’m not going to waste my time on a virtual debate,” he said in a Fox Business interview this morning. He also called the idea “ridiculous” and accused the Commission of “trying to protect Biden.”

Trump is himself the main reason for the health concerns; the President announced last Thursday night that he had tested positive for COVID-19. After a very brief stay at Walter Reed National Military Medical Center, Trump returned to the White House Monday evening. He’s already gotten right back on track with spreading misinformation about the virus through social media.

By all guidelines set by the Centers for Disease Control (CDC), holding a virtual debate would indeed be much, much safer for both candidates, their teams, and anyone else who might be in attendance at the debate to do so remotely instead. It’s the same precaution the rest of us have been taking for seven months now — but apparently, that doesn’t matter to Trump.

Trump’s likely still contagious — The CDC’s guidelines for curbing the spread of COVID-19 have, for the most part, remained the same since the beginning of the pandemic. They’re rules that, by now, the vast majority of the public knows well. If you experience symptoms of COVID-19 — or even if you think you might have come in contact with the virus — you need to self-quarantine for two weeks. Fourteen days at the bare minimum.

These guidelines mean Trump, who tested positive for COVID-19 on the evening of October 1, should not be participating in any in-person activities between now and October 16 at the earliest. The next presidential debate is scheduled for October 15.

We’re still not sure how this thing spreads — For months the CDC has flip-flopped about how, exactly, the coronavirus is spreading so quickly. The main method is by small droplets released into the air by an infected person. Just last week, though, the CDC finally updated its guidelines to warn that the virus can spread through the air, too.

The very real potential of aerosol transmission marks a pertinent evolution in how we think about and prevent the spread of the virus. We’re now re-thinking whether or not those plexiglass shields that have been popping up everywhere are actually enough to protect us.

There is actually precedent — As strange as it might sound, this wouldn’t be the first virtual presidential debate. The New York Times points out that, in 1960, the third debate between John F. Kennedy and Richard Nixon was held remotely. Nixon was in L.A. at the time, while Kennedy was in New York. A split-screen view showed those watching both candidates side-by-side.

The CDC and the debate commission should not allow Trump to participate in an in-person debate, even if he tries. And he will likely try — he’s already flaunted CDC guidelines by returning to his normal White House schedule, sans protective equipment, just days after his initial diagnosis.

His carelessness, along with that of his most trusted confidantes, has allowed the virus to spread to at least 34 people, according to a FEMA memo filed yesterday. The fact that the White House has been relying on email alone to trace the spread of the virus through its ranks probably hasn’t helped much.

Biden’s team has been more receptive to the news of a virtual debate. “Vice President Biden looks forward to speaking directly to the American people,” a Biden deputy campaign manager said this morning.