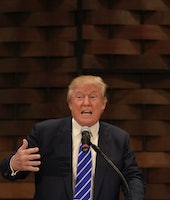 The number of voters the campaign targeted.

Cambridge Analytica is back in the news. Not for anything it's done recently — the British political consulting firm went bankrupt in 2019 — but for new revelations regarding how its services were used to influence the 2016 election, according to The Guardian. Channel 4 News in the UK received a leaked database showing the Trump campaign specifically targeted Black Americans with ads dissuading them from casting a vote at all.

Trump won by very slim margins in 2016, with turnout similar to that for Mitt Romney in 2012. Meanwhile, votes for Clinton fell by 230,000 compared to those received for Obama previously as more Democratic voters simply sat out the election. It's believed a deluge of anti-Clinton advertisements arguing she lacked sympathy for African Americans was one cause for the decline (though, granted, not the only reason).

Unprecedented manipulation — The leaked database consisted of records on 198 million Americans, some of which was gathered through unauthorized access to millions of Facebook profiles. The social network eventually paid the FTC a $5 billion fine for allowing a seemingly innocuous quiz app to siphon off data not only on users who tried the app but also all of their friends.

All eligible voters in the database were bucketed into eight categories, including one marked "deterrence," a special category for voters predicted to either vote for Clinton or not at all. The Trump campaign targeted these individuals using detailed information it gleaned from their profiles and data from third-party aggregators.

Experts say it's normal to use data in campaigns, but for the purpose of encouraging turnout for a candidate, not discouraging voters from participating altogether.

The poisoned well — Back in 2016, Facebook didn't archive political advertisements or publish them elsewhere, meaning only the users who were targeted could see them. Facebook has since changed that so candidates, the media, and the voting public can see what ads are being run and have an opportunity to respond to them.

Trump by far outspent the Clinton campaign on Facebook in the 2016 cycle, and employees there even said his campaign used the platform better than Clinton's. In a certain type of dirty trickster way, that's true.

Facebook argues it's working hard this year to combat misinformation and voter suppression in the upcoming election, by for instance labeling dubious posts by Trump and encouraging users to get out and vote. But the company itself caused a lot of this mess to through its large ad targeting business, algorithms that promote incendiary posts, and an unwillingness to take a hard stance on dangerous content. Facebook's ability to identify and target fence-sitting or undecided voters is precisely why it's so important it takes a stance on political manipulation and lies.