“In 2021, Twitter made the decision not to allow promotion of this documentary via advertising on the platform. This decision was aligned with the actions we took to suspend accounts dedicated to QAnon... As a result, the client will not be able to promote this content.” 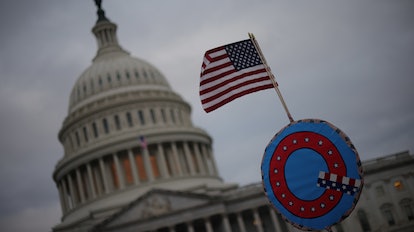 Many of you might not know this, but HBO released an excellent six-part docuseries last year called Q: Into the Storm that details the rise of QAnon, as well as the external factors that made such a movement possible. As it turns out, the reason you might be unaware of the series’ existence may have little to do with your pop cultural awareness, and more to do with Twitter actively suppressing the show’s advertisements, possibly in a bid to draw attention from the fact that they totally are one of the major reasons the cult rose to prominence in the first place.

“In 2021, Twitter made the decision not to allow promotion of this documentary via advertising on the platform,” the company told the documentary’s director, Cullen Hoback, as reviewed by Gizmodo. “This decision was aligned with the actions we took to suspend accounts dedicated to QAnon and to limit the visibility of QAnon-related content on the platform generally. As a result, the client will not be able to promote this content.”

Never mind that the series was about debunking Q content...

Shameless censoring — Twitter’s justification for stifling Hoback’s attempts to promote the documentary on the social media platform is flimsy at best. As the director explained to Gizmodo, “To my knowledge, no one has watched the series and walked away suddenly believing in QAnon,” said Hoback. “In fact, I received countless messages from folks saying it helped repair family relations and break some believers from the QAnon spell.”

It’s worth noting that a sizable portion of the documentary series concerns how social media platforms — particularly Twitter and Facebook — enabled Q cultists to proliferate for far too long. By the time Twitter did get around to addressing its little conspiracy theory emergency, the damage had already been done.

Free speech, am I right? — Of course, the irony is lost on none of us that one of the only explicit instances of shadow banning now comes from Twitter doing its best to stifle an anti-QAnon documentary. Perhaps Hoback will have better luck with Elon Musk’s new era of true “free speech” Twitter. He’ll just have to contend with conspiracists that will inevitably return from their caves onto the site, as well.