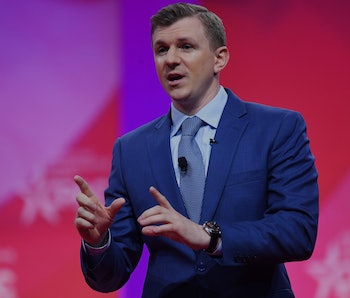 Twitter yesterday gave Project Veritas, the ironically-named, right-wing, pseudo-news service run by James O'Keefe, the Trump treatment by permanently suspending its Twitter account. The reason? Tweets of a video showing one of Project Veritas' staffers approaching Facebook executive Guy Rosen outside his home, effectively doxxing him in the process.

Various reporters confirmed the move on Thursday, and Politico spoke to O'Keefe, whose account was also temporarily suspended before being reinstated once the content Twitter found to be in violation of its policies had been removed. Twitter has said it will reinstate the Project Veritas account if it does likewise, but it's refused to do so to date.

Conservatives supportive of Project Veritas' particular brand of misinformation are, of course, crying "bias" and "censorship." The rest of us would like to remind O'Keefe to read the terms of service, and to consider that a private sector business reserves the right of admission.

The incident has pushed many conservatives to gnash their teeth and cry, once again, that Twitter is prejudiced against right-wing media, and right-wingers generally. But aside from that assertion regularly being debunked, here's a quick summary of James O'Keefe's ill-advised actions that led Twitter to respond with punitive measures.

"Unconscionable" — A Twitter spokeswoman told The New York Times, "The account, @Project_Veritas, was permanently suspended for repeated violations of Twitter’s private information policy." In response, O'Keefe is appealing the decision and has said, "It would be unconscionable for me to take down our reporting where it didn’t violate anyone’s privacy rights."

Receiving scrutiny is nothing new for Project Veritas. The far-right activist group is known for taking brazen and controversial steps to corner and embarrass members of the media as well as progressive companies and people. These sting operations have only further tarnished the group's already pretty seedy image in public.

Nothing new for Project Veritas — In 2017, a woman working for Project Veritas approached the Washington Post with sexual abuse allegations against then-Republican Senate candidate Roy Moore. The woman claimed that Moore had impregnated her as a teenager but after consistent and thorough questioning from The Washington Post, the publication stated that it chose not to publish a report on Moore because it found her account unsubstantiated and impossible to verify. Upon being confronted by the outlet, the woman claimed that she was not collaborating with any group to malign journalists. Later on, however, reporters found her at the Project Veritas office in New York.

In other words, a brief glimpse at Project Veritas' past record will show that O'Keefe — who himself was convicted in 2010 for using a fake identity to gain access in a federal venue — has a tenuous relationship with the truth at the best of times. Getting suspended from Twitter, like his favorite former President, was really only a matter of time.