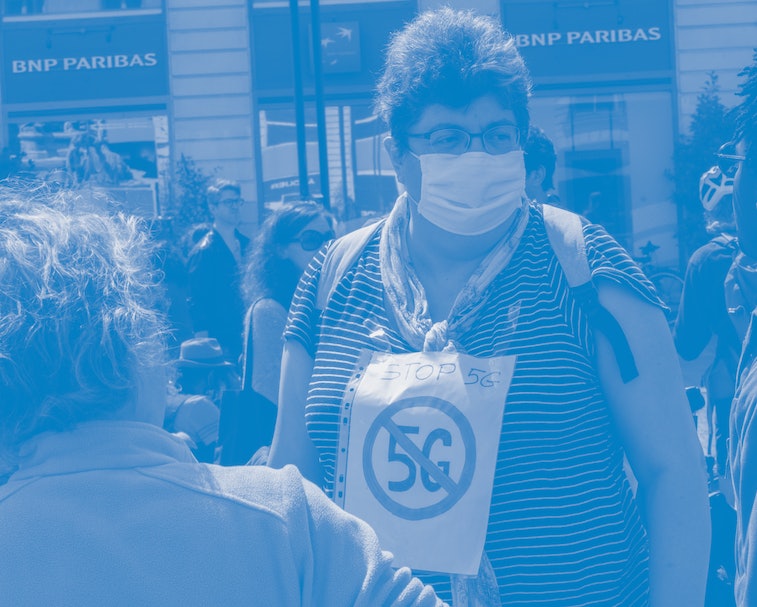 Twitter is finally (finally) labeling more COVID-19 tweets with fact-check labels, Business Insider reports. The latest set of tweets to be slapped with a misinformation label are those pertaining to the persistent, unfounded, and utterly ludicrous conspiracy theory that 5G can spread the novel coronavirus.

Though only the most incendiary of tweets will actually be removed by Twitter, the company is adding a label that says “Get the facts about COVID-19” to many tweets containing the words “corona” and “5G.”

Clicking the label brings you to a Twitter page entitled “No, 5G isn’t causing coronavirus.” That page includes an overview of the debunked theory with news articles, prominent tweets, and fact-checking links about the conspiracy.

A Twitter spokesperson confirmed the recent action to Business Insider. “Last month, we announced that we are introducing new labels and warning messages to provide additional context and information on some Tweets containing disputed or misleading information related to COVID-19.

It's great that Twitter is taking steps to keep its users updated and safe. But we've known this theory is false for months. What took Twitter so long to communicate that to its users?

Long overdue — Twitter announced its intention to improve fact-check labels on COVID-19-related information on May 11. The 5G conspiracy theory has been debunked many times, but first reports of its inaccuracy date back to early March.

So, what took so long? Twitter has acknowledged many times that its platform can easily be misused to spread dangerous misinformation to large swaths of people. And yet it took nearly a month — three, if you count back to when this fact-checking was readily available — for Twitter to alert users to its falsehood.

And it’s already a meme — Of course, it wouldn’t be Twitter without users making the company’s latest fact-checking efforts into a joke. The company has taken an aggressive approach to labeling posts; even tweets without much information that contain keywords are being labeled.

Since it’s almost guaranteed that tweets containing the words “corona” and “5G” will be hit with the label, users have taken the liberty of turning it into a meme.

So, while it’s certainly nice to see Twitter taking aggressive action against this misinformation, it’s really too little too late. Anyone who’s seen and bought into the 5G theory by now isn’t going to be swayed by Twitter’s label at this late date. Instead what we’re left with is fodder for memes. But hey, that's still more than Facebook's doing to combat misinformation.