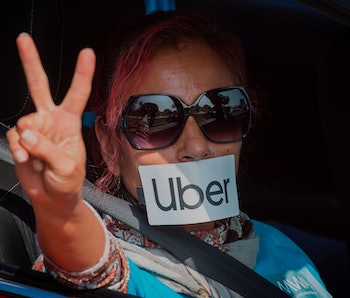 After losing a lengthy legal battle, Uber is officially categorizing its workforce of more than 70,000 drivers as "workers" in the United Kingdom, multiple outlets have reported. This is a landmark change for the labor force which was previously classified as independent contractors and follows a decision published by the court in February. Starting Wednesday, these workers will be guaranteed at least a legal minimum wage in the country, paid vacation time, and possible-though-not-guaranteed eligibility for enrolling in a retirement pension program. The company also plans to give a 12 percent increase in holiday pay for every hour a worker puts in during the period.

Converted to American dollars, the minimum wage in the United Kingdom comes to approximately $12. As Bloomberg tech editor Nate Lanxon explains, "Uber said it would treat this minimum as a floor, not a ceiling though, meaning an hour of driving will result in at least a set amount being paid but without limiting how much more can be made by taking additional trips.”

Uber’s loss is a win for gig economy workers — Although Uber is categorizing these drivers as workers, they are still not considered employees of the company and do not have access to full employee benefits. But this still is a major victory for drivers, as now they have some degree of worker protections.

Uber aggressively tried to push against the categorization of its labor force as "workers" and has agreed to change the classification only after losing this legal battle in the United Kingdom’s Supreme Court. After two Uber drivers brought on the case in the Supreme Court and demanded to be recognized as workers for the company, Uber filed an appeal claiming that it was an intermediary and not a transportation firm.

This appeal statement was dismissed by the court after it determined just how much power Uber had in controlling its workers. It sets the contractual terms for the workers, it controls how many rides a driver can select, it even punishes workers for rejecting too many trips, and it monitors their work through in-app star ratings, which has created a disciplinary system used to penalize drivers if their rating was not up to satisfaction. The system is as arbitrary as it is cruel.

The impact of this particular case is bound to reach the United States as well, where gig economy workers for the ride-sharing company and delivery apps have demanded better working protections and conditions only to be ignored by Big Tech.