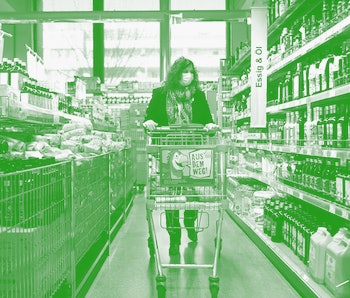 Uber is teaming up with grocery stores in Paris to bring essential items to residents in need during the COVID-19 pandemic, Reuters reports. The new service, which is a partnership with French grocery chain Carrefour, will open on April 6. Users will be able to call in orders directly to the store or order via the UberEats app from 11 a.m. to 11 p.m.

With a large portion of the world sheltering in place to fight the spread of the novel coronavirus, Uber is sure to see a large dip in profits for at least the first half of 2020. It’s smart for Uber to find new business ventures to fill in some of that profit gap. And it’s doing so with an essential service like grocery-shopping is even smarter, because it benefits its customers, too.

This has been in the works — Uber has been sitting on the idea of grocery delivery for some time now. Last year the company was in talks to bring grocery delivery to UberEats in both Australia and the U.K. As far as the public knows, those plans never had time to fully pan out.

Uber CEO Dara Khosrowshahi reassured investors last month that the company would be exploring “alternative use cases” for its millions of drivers.

Goals of expansion — If the partnership with Carrefour goes well in Paris, Uber hopes to soon bring the program to the rest of France. And then maybe to other parts of the world, too.

Already Uber is exploring similar partnerships. Customers in São Paulo, Brazil can use UberEats to order from pharmacies and pet stores; in Spain, various convenience stores around the country are delivering products to customers in partnership with Galp, a Portuguese energy group.

Ease of use is now essential — Uber’s business model has always prioritized efficiency and ease-of-use. That’s a huge part of what’s made the company such a massive success around the world: a driver is always waiting for you to tap a few buttons on your phone. In many cases this quick service is a luxury; right now, however, it’s essential.

The new partnership promises groceries at your door in 30 minutes or less. This kind of service is invaluable right now, especially for populations most vulnerable to COVID-19’s spread, such as immunocompromised people and older people.

All orders placed with Carrefour via UberEats will have their delivery fees waived for the entire month of April. Those few dollars can make an enormous difference for the millions of people who are currently without income because of the pandemic.

Uber’s accelerated expansion into delivering groceries will surely help the company’s profits. It will also bring much-needed food and other essential supplies to those who need them most. If the program succeeds, it will be a win-win for everyone involved.