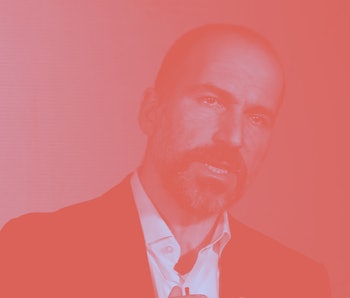 Contractors for both Uber and Lyft face steep economic insecurity and have access to little to no benefits, including health care. Uber CEO Dara Khosrowshahi says he wants to make some amendments on that front, according to CNBC. "What we’re looking for essentially is that flexible on-ramp or off-ramp," Khosrowshahi told CNBC. "You want to work, you get the benefits, you don’t want to work, you don’t."

This is a peculiar position to take. Under COVID-19, Khosrowshahi's enterprise is doing rather well. In spite of a $2.9 billion loss, Uber's stock has jumped by at least 8 percent after Khosrowshahi informed investors and analysts that the company was faring well in spite of the viral outbreak. Its food delivery service, in particular, as well as ride-sharing feature are some of the most relied-upon services right now. The idea that these contractors should get "some" health benefits is, frankly, cruel.

Khosrowshahi's 'third' way — "I think this system of if you don’t work 40 hours, you’re not full-time, if you work 40 hours, you’re full-time, and then there’s this hard break between the two, that’s the old world," the CEO told CNBC. "If you’re putting in the hours, you should get minimum earnings based on the hours that you’re working and you should get health-care based on the hours that you’re working. And if you have haves and have-nots based on a particular number of hours worked, that doesn’t make sense... in a technical, forward world."

Gig workers deserve better — Uber, in particular, does not have a labor record that inspires public confidence. The company was hit with a lawsuit by the California Attorney General as well as three city attorneys. The lawsuit forcefully argues that Uber, as well as Lyft, misclassifies its gig workers as contractors and thus creates a convenient loophole that denies these drivers basic labor protections.

Unsurprisingly, the company has fought against the lawsuit. In March, the Uber CEO even wrote a letter to Donald Trump in which he said, "My goal in writing to you is not to ask for a bailout for Uber, but rather for support for the independent workers on our platform and, once we move past the immediate crisis, the opportunity to legally provide them with a real safety net going forward." He called this strategy the "third" way.

Health care is a human right — From a for-profit perspective, Khosrowshahi's thought process makes sense — at least technically. You perform labor and you get (some) reward in return. But from the crucial perspective of labor rights, this transactional approach where drivers toil endlessly for little pay only to be given a hint of health care is cruel, especially during a pandemic. It strikes as dangerously exploitative. It should not have to be said but health care should be treated as an intrinsic human right that exists independent of one's productive value.