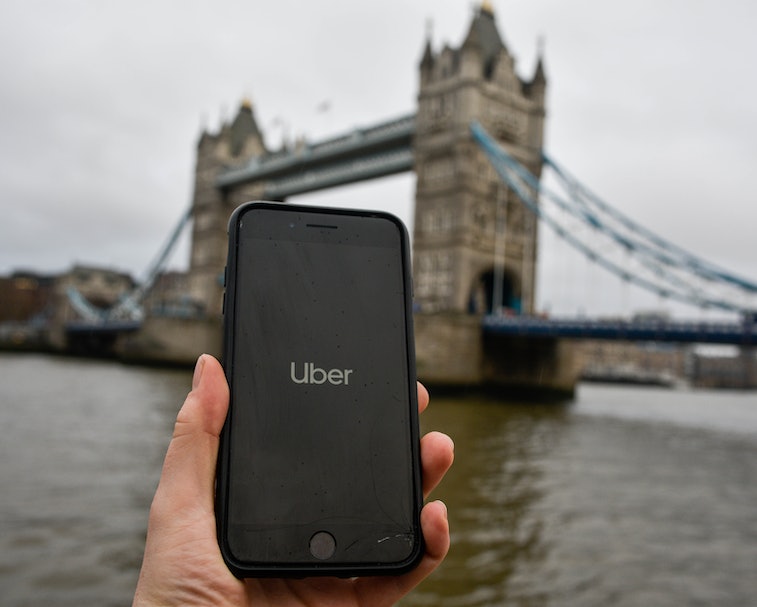 After five years and three lost appeals, the UK Supreme Court unanimously voted today in favor of forcing Uber to classify its drivers as company workers rather than self-employed. The landmark decision across the pond means thousands earning income from the ride-sharing app are now slated to potentially receive holiday pay and hourly minimum wages.

According to a very British-sounding official named Lord Leggatt who spoke to the BBC, "The Supreme Court unanimously dismissed Uber's appeal that it was an intermediary party and stated that drivers should be considered to be working not only when driving a passenger, but whenever logged in to the app."

The Supreme Court's decision puts an end to Uber's potential pathways out of finally having to offer basic benefits to its British-based drivers, an outcome it has hoped to avoid since 2016, when an initial suit was brought to tribunal by two former drivers. "I think it's a massive achievement in a way that we were able to stand up against a giant," said Yaseen Aslaam, one of the original plantiffs and president of the UK's App Drivers & Couriers Union.

Still facing an uphill battle — Of course, Uber is already claiming the ruling's fine print only applies to a "small number" of its drivers (i.e. the ones who filed the complaint five years ago) and that the company has already addressed these changes. Dr. Alex Wood, an Internet Institute research associate at the University of Oxford, argued that the new rules "aren't enforced and it falls to workers to bring subsequent tribunals ... in reality, it's very easy for Uber to just ignore this until more tribunals come for the remaining 40,000 [workers]."

Workers weren't so lucky in California — In America, things have panned out very differently to Britain's (sort of) pro-worker conclusion. Back in November, Californians overwhelmingly voted in favor of Proposition 22, a legal amendment that exempted gig-economy companies like Uber, Postmates, and Lyft from having to classify their workers as actual employees and thus offer some very, very (very) basic benefits that everyone deserves. Prop 22 ended up overturning a previous landmark ruling in favor of classifying Californian Uber drivers as employees.

Uber played dirty to get there — While last year's outcome in California might initially point towards a vast difference in public opinion between Americans and the Brits, it's important to remember the absolutely massive smear campaign Uber waged to scare up the votes it needed to win.

The company still regularly maintains that the increased financial burden to offer its drivers more benefits and standard hourly rates will cause fees to skyrocket for consumers, although seeing as how Uber somehow managed to burn through $100 million in ad money without even noticing it, we find this assertion hard to believe. Perhaps if you can't pay people properly it's your business model that's broken?