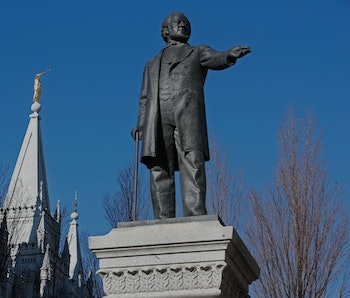 Perhaps that phallic monolith in the middle of nowhere Utah was a harbinger of things to come, after all: Republican (of course) House Reps in the Beehive State just passed a proposal that would require all phones and tablets sold in-state to come preinstalled with content filters “blocking material that is harmful to minors.”

Utah’s governor, the appropriately named Republican, Spencer Cox, now has until March 25 to either veto the bill, or sign it into law. Here’s a picture of the dude — we’ll let you guess which way he’s leaning.

If fully enacted, HB72 would require any smartphone and tablet sold within state lines after January 1, 2022, to come already equipped with explicit filtering mechanisms. That said, adults would still be able to toggle these features, so if this sounds pretty redundant given pre-existing parental control options... um, we’re right there with you.

Five more states needed to pile on — The reactionary measure is almost certainly yet another political stunt by conservative state lawmakers attempting to drum up voter support, but that doesn’t make the censorship sentiment any less troubling. Luckily, even if HB72 is greenlit by Cox, five more states would have to sign similar laws into effect before product changes could begin.

And that’s not even taking into account tech giants like Apple and Google raising their own kinds of legal hell in opposition. Instead of conservatives continuing their long tradition of moral policing, perhaps they should tend to their own house (of representatives) before setting their sights on everyone elses.