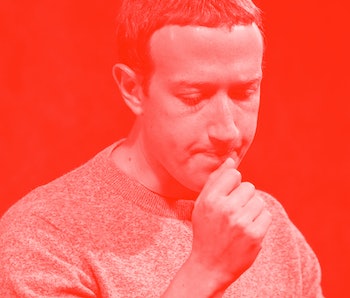 Amid calls for Facebook to seriously address its speech policies, one by one major companies like Ben and Jerry's, Magnolia Pictures, Eddie Bauer, and others are pulling the plug on advertising through Mark Zuckerberg's network. Two more companies to join the growing list are Verizon, CNBC reports, and Unilever. Both have pulled out of advertising on Facebook and Instagram, and Unilever says it's also extending this decision to Twitter.

Verizon's decision appears to be a colossal move after the Anti-Defamation League's (ADL) CEO Jonathan Greenblatt rang the alarm on Verizon's ad presence in uncomfortable proximity with a hateful video from the conspiracy movement QAnon.

The open letter from Greenblatt notes that ADL "found an advertisement for Verizon appearing next to a video from the conspiracy group QAnon drawing on hateful and anti-Semitic rhetoric, warning that the Federal Emergency Management Agency (FEMA) is planning to bring on civil war with concentration camps and coffins at the ready and claiming Americans are already quarantined in militarized districts."

Since then, Verizon has distanced itself from both Facebook and Instagram. And it's going to put a steep dent in Zuckerberg's empire. According to CNBC, the company's chief media officer John Nitti stated:

We have strict content policies in place and have zero tolerance when they are breached, we take action. We’re pausing our advertising until Facebook can create an acceptable solution that makes us comfortable and is consistent with what we’ve done with YouTube and other partners.

Zuckerberg's wallet thins out — Zuckerberg, whose position on Donald Trump's incendiary pro-violence post and other equally jarring content has rattled the public, is likely going to feel the financial repercussions of this particular withdrawal, among others.

As CNBC points out by referring to marketing analytics company Pathmatics, Verizon's investment in Facebook is no laughing matter. Between mid-May and mid-June, the company spent $406,600 in Instagram ads while $1,460,300 on Facebook.

Facebook is scrambling — For its own part, Facebook has attempted to save face through a statement from its VP of global business Carolyn Everson. Everson's memo, according to The Wall Street Journal, emphasizes Facebook's commitment to "principles" over "business interests." This appears to be an amusing contradiction to what Zuckerberg has recently said about hateful posts (in what could simply be a cynical bid to appease shareholders). It's a tough moment for Facebook and it won't ease up anytime soon. In Greenblatt's open letter, he notes that Facebook will not change its ways "unless forced."

"Together, we can make sure that Facebook is good not only for advertisers," the ADL CEO wrote, "but also for society."