Wanna buy an NFT ticket to see that Beeple NFT in person? 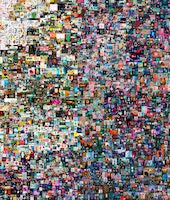 The cost of an "Early Bird" NFT general admission ticket (and one drink) to Dreamverse.

Curse the Crypto Gods, here we go again — Beeple’s controversial, sketchy, infantile NFT art piece, “Everydays: The First 5000 Days,” has resurfaced yet again to bilk people with money to burn out of a lot of cash that could otherwise be put to very good use. If you’ll recall, Christie’s auctioned the digital artist’s collection of daily, free (that’s right, free) online doodles as a single non-fungible token earlier this year for a record-setting, infuriating $69 million.

Now, everybody who lost the chance to throw down more money than most of humanity will make in their entire lives on some online bragging rights is getting another chance to waste away their funds in support of meme grifters’ vacuous, buzzword art movement. This November will mark the “inaugural” public display of Beeple’s “Everydays: The First 5000 Days” as part of the upcoming Dreamverse event in New York City. The gathering will include a daytime gallery displaying a bunch of other digital artists, as well as an evening party / concert / display of the Beeple NFT. Attending the latter event will set you back a minimum of $150 for a basic entry ticket, while the limited edition NFT passes start at $475.

How it will “work” — Although Metakovan, the pseudonymous owner of Beeple’s “Everydays,” technically holds what amounts to a digital certification of authenticity for the collage, we feel the need to reiterate that literally every single one of those pieces is available online for absolutely free. That said, Metapurse (Metakovan’s crypto fund) promises its Dreamverse shindig “will be projected on a bespoke three-story-tall hybrid physical and digital structure,” which we suppose will probably look pretty cool. Not, like, $475 cool, but y’know. We’ll watch whatever video of it gets posted to YouTube later on in November.

Just make your own instead — Sure, you could plop down hundreds of dollars to stand around what surely will be the most insufferable people within a five-mile radius while they snap selfies in front of the Beeple art installation... you could, or you could just make your own Beeple ripoff art for free, mint it as an NFT, and roll the crypto dice to see if anyone will pay you money for it. Here’s one we made in two seconds thanks to the Beeple Generator. It’s the doge from Dogecoin walking Donald Trump and Mike Pence. Surely someone will fork over an ungodly amount of Ethereum for it, right? Right?