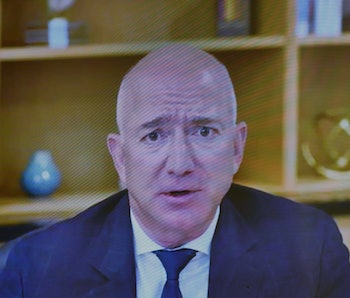 Despite being owned by billionaire and Amazon founder Jeff Bezos, The Washington Post still enjoys a formidable reputation, not just in the U.S., but globally. Its motto, "Democracy Dies In Darkness," is a clarion call to truth, egalitarianism, and the illuminative power of fact-based reportage. Which is why when it ran a site-takeover for Donald Trump's campaign today in which the bogeyman of the "Radical Left" was invoked, some people, like editor Michael Calderone, were naturally appalled. Others, meanwhile, saw it as a cunning way to waste Trump campaign funds preaching to the probably already decided.

The "Radical Left" — A video that auto-plays upon opening the site uses clips of Democratic presidential hopeful Joe Biden threatening to raise taxes and naturalize 11 million immigrants, and includes phrases like "The radical left has taken over Joe Biden and the Democratic Party, don't let them take over America."

Banner ads on either side of the masthead and at regular intervals say that now that Biden's running mate Kamala Harris has joined the Democratic ticket, the aforementioned take over is complete, followed by a call-to-action button with the text "too radical for us" on it. The fires raging in the background are the sort of subtlety we've come to expect from the Trump-Pence misinformation machine.

Contradiction in real-time — Nothing truly cancels out whatever you're claiming to support in text when your ads carry the complete opposite message. If you click the ad, it will lead you to a page where Biden is described as "Sleepy Joe" by the Trump campaign. He is criticized as a supposed servant of China and its interests. Below is a screenshot of the first thing you'll see when you open the page.

Scroll down, you'll see a massive title "Dangerous for America" headline, with four videos linking to cherry-picked policy positions from both Biden and Harris. For example, the Trump campaign finds Biden to be too soft on China (this isn't surprising considering Trump's ongoing trade blacklist of Chinese companies and the 5G-related war with Huawei), it then points to Biden's political positions on Social Security and Medicare.

Biden's physical and mental health is also brought up as a concern while the campaign lampoons Harris for wanting to "cut police funding." Never mind the fact that Harris' political record is a constant contradiction of that statement, which is an issue constantly broached by leftists online.

It's a free market — Politicians buy ad space and time in publications all the time. It's nothing new. You could argue that reporters at The Washington Post can use the Trump campaign money to write incisive takedowns of his political past, policies, conduct, and more. It's an argument already being made. Plus, it's amusing closing the video and looking at the content of today's front page. Pro-Trump, it isn't.

For a publication that was sued by Trump for supposed "defamation" and has had to endure the President's anti-press mockery and insults, capitulating to his campaign for a few dollars is either shameful, or first-class trolling. We're hoping it's the latter, and that it's a genuine indication that editorial and advertorial at WaPo are siloed. Long may they stay that way if that is, indeed, the case.