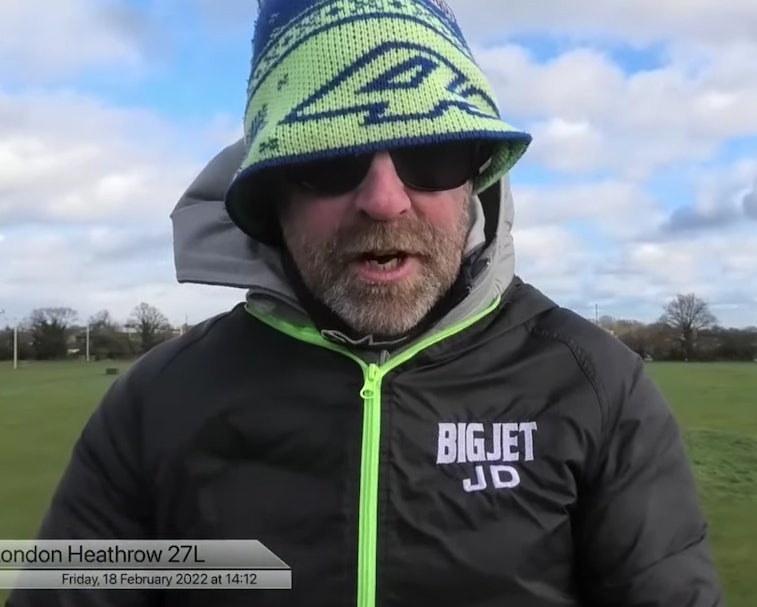 As I write this, a man is nearly 5-and-a-half hours into his livestream of planes attempting to land at the already notoriously difficult Heathrow Airport during Winter Storm Eunice. “Go on, then!” he shouts enthusiastically as the Boeings and Airbuses descend from the clouds, keeling from one side to the next as they maintain the proper speed, angle, and trajectory to prevent a mass tragedy. “Qatar, let’s see what yer made of, son!” he calls out as if he were watching a footie match on TV.

Give the Big Jet TV guy a Pulitzer for this kind of coverage, you cowards. Watch it live while you can below, and if you’re late to reading this, be sure to go back and watch at least some of the joyous celebration of human skill, ingenuity, and probably more than a few beers.

Pleasure to meet you, Jesse Dyer — Like many others this morning, this is our first introduction to Jesse Dyer’s Big Jet TV, which appears to have first debuted on YouTube back in 2017. “Connecting real Aviation Fans across the World - and it's all LIVE!” reads the channel’s description. “I work tirelessly to bring my Members the very best in LIVE Aviation content, including Member-Only Feature shows from International destinations as well as exclusive Airside shows from the most exciting Airports.”

Go on then, lads.