We have dime-operated rental typewriters to thank for ‘Fahrenheit 451’ 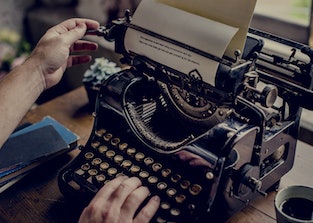 Though the Trump administration triggered the return of George Orwell's iconic1984 to bestsellers lists, the unique hellscape of 2020 has renewed interest in Ray Bradbury’s not-quite-as-iconic-but-nonetheless-prescient Fahrenheit 451. Whether you read it for the first time this year, revisited it with more mature eyes, or have never read it, if one day you do you'll likely be impressed by Bradbury’s skill. What makes it all the more frustrating — especially if you're a writer yourself — is that it turns out he took practically no time at all to write it. We know this thanks to a curiosity regarding typewriters of the time.

Driven by cost and children — Open Culture has seen fit to remind us all that the classic novel had humble beginnings. Typed on a rental typewriter for $9.80 at a dime per half an hour, the book began as a 25,000-word novella called The Fireman. Over the course of nine days, Bradbury spent 49 hours on this first draft.

His speed was largely driven by the sheer cost (we’re talking mid-century dimes here) and the ticking clock of being a present father. Surely, as more parents have had to attempt working from home while their children are being adorable, you can understand why Bradbury could no longer write from his garage. Unable to afford an office, he turned to rental typewriters in the basement of UCLA’s Powell Library.

If you think the timeline is a fluke, when asked to flesh out the novella into the now immensely popular novel, Bradbury only took another nine days to do so. We don’t have figures for his typewriter bill that time around, but he needed to do additional, in-person research the library couldn’t supply. Sadly, this means it probably took even less time to physically write the next draft.

The power of the library — Bradbury was a lifelong advocate of taking advantage of what libraries have to offer. Despite fairly strong ebook programs, their closure during the pandemic has been felt severely as de facto community centers. Generally, a library card grants free access to its computers for 15 minutes to an hour (often flexible based on demand), but community members could also pay to play for extended periods.

Maybe, when things eventually return to some level of normalcy, you could bang out the next Great American Novel at your local branch. That won't even cost you $10... though you'll probably spend that on the transport required to get there, or the coffees procured en route.

More like this
Chris Stokel-Walker
Sep. 14, 2022
Artificial intelligence
This couple is launching an organization to protect artists in the AI era
Annie Rauwerda
Sep. 19, 2022
Culture
A ragtag community is keeping this aughts Wikipedia gadget alive
Will Gendron
Sep. 16, 2022
Culture
Jay-Z and Jack Dorsey's Bitcoin Academy is not going over well