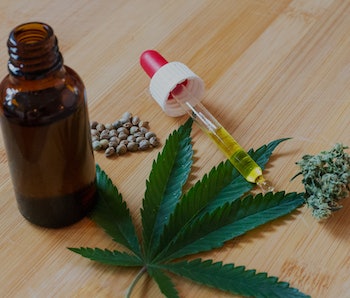 Apple’s App Store guidelines updated back in June with some long-awaited changes regarding its cannabis product regulations — customers can now, at long last, actually purchase all their greenery needs in-app via companies like Weedmaps, Eaze, and Beta.

“It's encouraging to see policies and attitudes toward cannabis shift in a way that promises remarkable growth, and we look forward to introducing an even simpler way to order cannabis from retailers through our platform,” WM Inc. CTO Justin Dean said in an official statement. We are sure this news will be especially exciting to WeWork’s founder and former CEO, Adam Neumann, who reportedly used to smoke so much in his private jet that his other passengers and crew needed to don oxygen masks. He was later ousted for excessive drug use and spending, if you can believe it.

Anyway. As many of you are probably well-aware of by now, Apple previously allowed apps such as local dispensary catalogs and menus, but prohibited any kind of in-app sales due to local and federal regulation. With the latest policy updates, however, "licensed or otherwise legal cannabis dispensaries” can now offer their wares legally and safely... sometimes, because of course all of this is now subject to your local and state laws, which Apple has made damn sure to follow by the letter.

As such, the new changes in cannabis product sales only go into effect within states where purchase, delivery, and possession are all legal. Californians may rejoice at the ability to use Apple Pay to replenish their stocks from the comfort of their homes, but people such as stressed-out writers living in... oh, let’s just throw a dart at the map here... Louisiana are still very much out of luck.

Allow us to suggest some purchases — Does the prospect of an entirely new era of marijuana-related purchasing power feel a bit overwhelming? Well, there’s no need to worry: Back on April 20 of this year (obviously), our staff compiled a very handy guide to the internet’s latest product endorsements on everything from gummies to vapes to ridiculous weed gadgetry. The offerings might not be as cool as 3D-printed, personalized CBD tablets, but we feel like it’s still probably enough to get the ball rolling as you try out all the new dispensary app options.