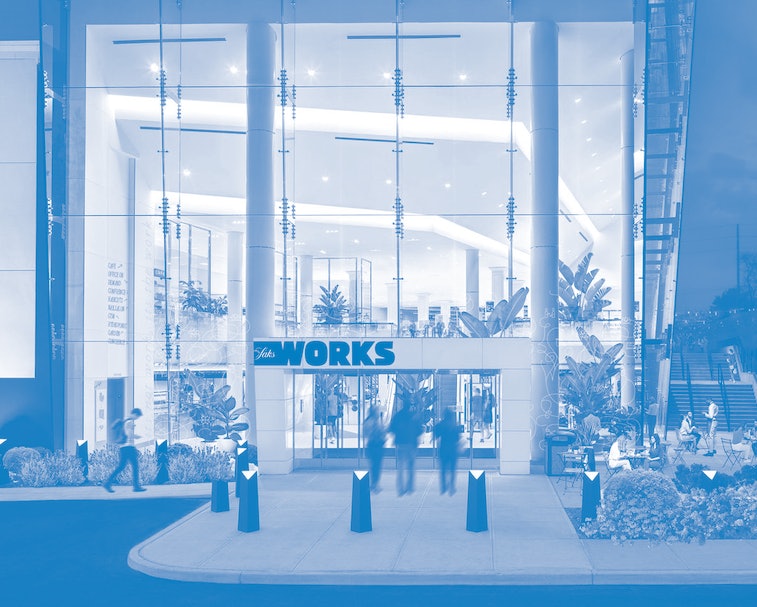 Saks Fifth Avenue went bankrupt last year and closed all its stores, but its parent company has found a second act. The company, Hudson’s Bay, owns many of the buildings that the department store operated out of, and it’s going to convert them into co-working spaces managed by WeWork. According to The Wall Street Journal, the offices won’t be called WeWork, but instead, Hudson’s Bay is repurposing the Saks name to dub them... “SaksWorks.” That’s a hell of a pivot for the once storied department store chain.

SaksWorks — The first five such co-working spaces are set to open in New York next month, with more potentially to come. Hudson’s Bay says the offices will have less private space than a typical WeWork, with most desks in an open setting. Locations will include gyms and cafes.

SaksWorks will be priced similarly to WeWork at $299 per month for an All Access membership, which allows members to work from any location.

Major department stores like Saks Fifth Avenue were struggling even before the pandemic thanks to the trend toward e-commerce. The foot traffic just isn’t there to support such large, often empty aisles. At the same time, many white-collar workers have made it clear they would like to continue working from home at least some of the time, even once the coronavirus pandemic subsides. A co-working space could allow them to stay at home in the suburbs and go into an office when they need a change of setting.

Win-win? — The pandemic highlighted a flaw in WeWork’s business model, but it was struggling even before. The co-working company holds long-term leases on most of its office buildings and then rents out desks to members on a per-month basis. When the pandemic started, many immediately canceled their memberships while WeWork still had to pay its rent. The company’s previously lavish spending was cut and offices were closed to stay afloat.

WeWork has started to rebound with the new remote work trend, and a deal with Hudson’s Bay could offer a solution to its business model troubles. Hudson’s Bay already owns its buildings, and it just needs to find a way to make money off them in new ways now that malls are out of style. Renting desks to affluent office workers may be more profitable than trying to sell clothes.

Under the deal with Hudson’s Bay, WeWork won’t hold lease obligations on the buildings. It will simply manage the operations — like renovating the spaces and refilling coffee — and in exchange take a cut of monthly fees. That model could be a lot safer.

Many people enjoy the experience offered by WeWork. Its offices are hip and nice, and kombucha is always on tap. The fundamental problem was that its costs were too high relative to what it charged customers (to say nothing of its reckless CEO’s needless spending). Managing stylish office buildings for landlords could prove a more successful, asset-light model akin to Uber.