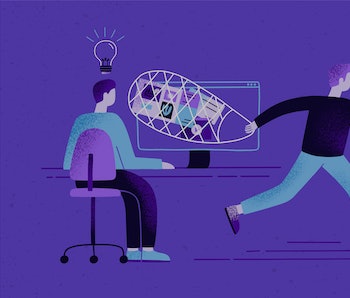 WeWork, the office space-sharing company best known for losing billions of dollars at a go, has dedicated $2 million to Black-owned WeWork member businesses. Through the program, WeWork members have the opportunity to receive a $10,000 grant, as well as support and resources from WeWork Labs.

The grant also comes with program terms amounting to nearly 5,000 words of legal jargon. And hidden within those terms: handing over the rights to any work you create with that smooth 10K.

Twitter user @PiperAnderson1 pointed out the grant program’s sinister inner workings in a tweet Wednesday, which quickly garnered hundreds of likes and retweets. Anderson worries that agreeing to the grant’s terms essentially equates to signing over the rights to whatever projects are worked on with the funds.

The problem here is one WeWork could have easily avoided if it had wanted grant applicants to be aware of their rights under the program — all it would’ve taken is a bulleted list of what, exactly, you’re signing away. Instead, WeWork chose pages and pages of legalese that no one but a lawyer would be able to parse out.

WeWork’s motives here come across as sinister, to say the least. If all the company cared about was helping Black business owners, it wouldn’t attach so many sneaky terms into its grant program. To all appearances, WeWork is looking to exploit Black businesses rather than assist them.

What the terms say — Most of the grant program terms are standard: eligibility rules, application data, taxes, etc. But things break down in the Ownership section. The terms state:

What this means — Listen, we’re not lawyers. We’ve reached out to a few to comb through the finer details of the grant terms, and we’ll update this piece with more information when we have it.

In spite of the mountain of jargon, the grant terms make it clear that WeWork wants to retain at least some of the rights to any work produced under the program. Those rights are excessive — amongst other uses, the program terms state specifically that WeWork can “exploit” your work in whatever way it pleases.

On June 2, in announcing the Black business grant program, WeWork stated: “Black lives matter, and deserve the opportunity to not just live, but to thrive.”

Besides being awkwardly phrased, that commitment is also severely weakened by the grant program’s underhanded reservation of intellectual property rights. This isn’t a grant program — it’s a scam.

WeWork did not respond to a request for comment by the time of publication.