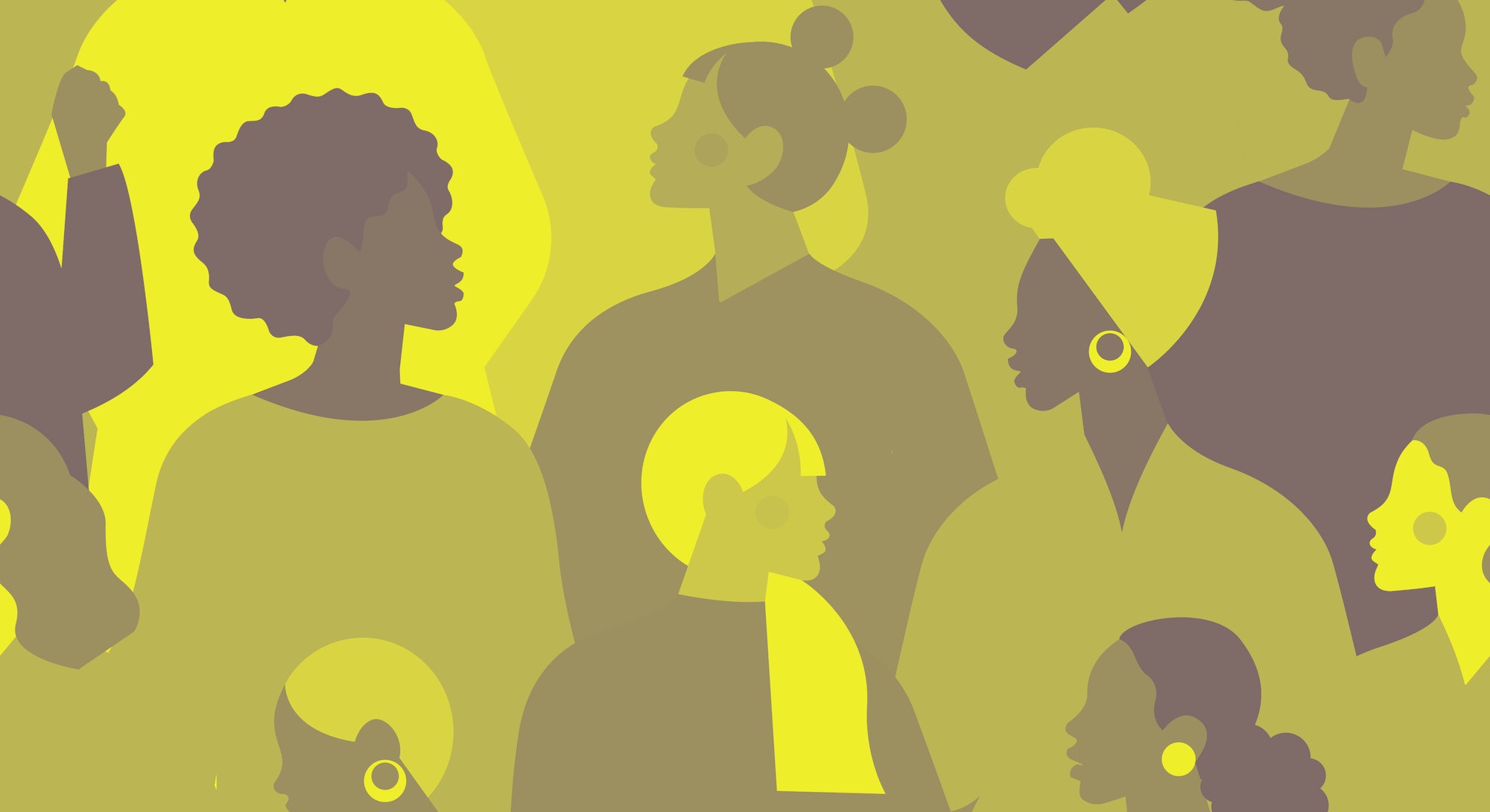 Search the term “for women” and sift through the app store. You’ll find it riddled with exclamation points and bathed in shades of pink. From a never-ending selection of flowery period trackers to “girls only” social networks that insist users “smile at strangers,” apps targeting female audiences are widely stuck in a type of branding that feels somehow both exclusive and offensively generalizing—targeting at once “only girls” while telling all “girls” that they’re the same.

Such a design is almost surprising in an era that so openly acknowledges the failure of adhering to gender stereotypes, from ads that attempt to discourage toxic masculinity to gender-neutral beauty brands. And studies show that people don’t like being marketed to based on their gender, either. A series of experiments carried out by associate professor Leslie John and colleagues at the Harvard Business School found that explicitly gendered marketing often “backfires.”

For example, in one of her team’s experiments, John and colleagues asked female-identified participants to choose between purple and green calculators. Fifty-one percent chose purple. When the purple calculators came with labels indicating they were “for women,” only 24 percent of female participants chose them over the non-labeled green ones.

“People feel excessively pigeonholed,” John says, when confronted with labels that only address their gender. “It makes you feel like you're reduced to a single category of membership.”

However, John has noticed exceptions. “We think that there might be something to whether the product itself inherently needs to be gendered,” she says. Calculators don’t need to be gendered. But multivitamins for women, John suggests, are composed of different ingredients than those made for men. Branding these vitamins “for women” is functional, not decorative.

While many apps that cater to female users are functionally meant for people belonging to a certain category (like mothers or people who get periods), not all of those people identify as women—and (of course) not all women like the same design tropes. So why do certain apps still insist on coloring their products pink and chirpily calling for their users to be smiling and “empowered”?

To answer this perplexing question, Input spoke with several creators and designers of apps made for mostly female-identified users. Some stand by “girly” branding, others attempt to avoid it at all costs. Here are the decisions that went into designing apps ranging from a period tracker to a women’s investment tool.

Forgoing pink, period tracker Clue’s primary brand color is red (like periods), and its tone, as the company’s senior graphic designer Marta Pucci describes, is “tech savvy but human” and “scientific.” After all, it’s meant for monitoring users’ health. Though instinct might be to categorize period tracking apps among the “inherently gendered” products John describes, Pucci makes a point not to call Clue’s target users “female,” but rather “people with cycles.” Non-binary folks and trans men can get their periods, too.

Clue has made its share of design mistakes in the past. In addition to a “fertility window” that users were unable to remove from their tracking calendars—regardless of whether they were planning or able to conceive—which has since been removed, Clue’s also had to amend some of its imagery. For example, Clue users have the option to track their sexual activity and can indicate whether they’ve had protected or unprotected sex. The icon for protected sex, says Pucci, used to be a silhouette of a man wearing a tie. A man without a tie represented the unprotected sex option.

Friend-finding app Vina’s founder and CEO, Olivia June, wanted her app to be “feminine without being girly—so we didn’t really want it to be pink or purple,” she says. To help, she looked to fashion blogs for inspiration, which June says are good at “capturing femininity without being pink.”

Vina’s tone is casual, like you’re talking to “one of your female friends,” says June, which makes sense for a friend-finding app. Some Vina members, however, have taken issue with the tone, commenting that they want the app to sound like a business, not a friend. Customer support emails signed with an “XO” rubbed them the wrong way.

But June doesn’t want to compromise the app’s friendly voice on account of some customers’ negative feedback. Since most of Vina’s members are between 18 and 35 years old, June is convinced they prefer the non-businesslike tone.

Sometimes that tone reads as problematic, like when Vina’s “manifesto” tells its users to “smile at strangers,” echoing a common catcall. “I haven't had anyone ever bring up that connection,” she tells me.

Ellevest, an investment app targeting female users, launched the day after the 2016 presidential election, when Donald Trump was voted into office. “We couldn’t have been pink, especially not right after that election,” says the product’s chief experience officer, Melissa Cullens, “because what women wanted was not to be patronized.” What they wanted, she figured, was to be treated as “smart, capable people” with an investment platform that was built with them in mind.

Ellevest places itself in that category of products that are functionally gender-specific. Ellevest’s website points to studies that show how women tend to invest less than their male counterparts, and notes how the gender pay gap influences investing habits. But Cullens and team were wary of branding an app about money for women only, pointing to the absurdity of ideas like the hypothetical Lady Dorito.

“Mistakes happen when women are marginalized and treated as a special interest group that needs something different and cute,” says Cullens. That’s why Ellevest’s designers went with a minimal, “clean” look for the app. They wanted it to appear timeless. (Ideally, users will stick with the app for years as their investments mature.) That meant not going with a design that screamed “disruptive tech startup!” says Cullens—another reason to avoid so-called “millennial pink” in its branding.

Peanut, an app built for mothers looking to “connect and learn from like-minded women,” has two main brand colors—yellow for its “Trying to Conceive” section and pink for its motherhood and pregnancy groups. The yellow comes from pineapples as a conception symbol, says U.K.-based Natalie King, Peanut’s lead product designer, who started at the company this year. As for pink? It’s “inherently tied to motherhood and all things women, be that good or bad,” she says.

The app’s main goal is to be “welcoming” for new users, so that’s reflected in its otherwise matter-of-fact brand voice. This no-frills voice echoes Peanut’s overall design, which was made to reflect its users’ “motivations and behaviors,” says King, not just their gender. As new moms, Peanut’s users tend to be “very time poor,” King adds, “and need things to be recognizable.” Hence its Tinder-like design, where users can swipe to find others to chat with. (Peanut’s cofounder, Michelle Kennedy, previously served as a board advisor at Bumble.)

While Peanut uses “women” and the pronouns “she/her” to describe users, its designers have been talking recently about using language more inclusive to non-binary users.

When asked why she chose to make her female-only social platform pink, Sall Grover, Australian founder of female-only social app Giggle, references Mamie Eisenhower. The first lady helped popularize the color for women after World War II ended, wearing a rhinestone-studded pink ball gown to husband Dwight Eisenhower’s inauguration in 1953. “After years of drab colors like brown and navy, it signified that the bad times were over and people could have fun again,” Grover says. “I love that history and what that means.”

Pink aside, Giggle has come under fire for stereotyping female users in another, more insidious way—by their bone structure. The app uses facial recognition to identify the gender of those trying to enter the app while banning those ID’d as male. Of course, bone structure can’t accurately indicate someone’s gender identity, and trans women responded with appropriate ire and sarcasm. (Grover says she offers trans women another way to sign up for the app—by sending a selfie to get manually approved for membership.)

Beyond this glaring issue, Grover has also had to defend her app’s name, Giggle, which she decided on after Googling the collective noun for a group of girls. “I don’t care if people think that girls, when they get together, are just stupid, airhead, giggling girls,” she says. “I know they’re not.” Giggle, she insists, allows female users to take ownership of an otherwise derogatory term.

As for choosing to use “girls” in her app’s language as opposed to women (the app’s users are adults), Grover, 35, says she still calls herself a girl. “It would never occur to me to refer to myself as a woman.”

Regardless of the choices these apps’ creators and designers have made, they were all some kind of reaction to gendered stereotypes. Whether they’re taking “ownership” of a stereotype or purposefully eschewing one, deciding to color an app pink or not will likely haunt the makers of apps for cis and trans women, people with periods, and mothers for some time.