What's up with the Dilbert guy fantasizing about dead kids?

“When a young male (let's say 14 to 19) is a danger to himself and others, society gives the supporting family two options: 1. Watch people die. 2. Kill your own son. Those are your only options.” 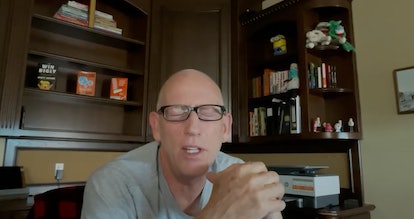 It has been said that there is no such thing as a good tweet. While that remains up for debate, no one would deny the existence of those that are unfathomably bad. This is the Input Bad Tweet Hall of Fame.

At the onset of summer, Scott Adams — the guy who created Dilbert and predicted Republicans would be hunted down in the streets if Joe Biden won the presidency — suggested kids be allowed to kill their bullies. “If we made it legal for kids to kill their bullies, a lot of problems would go away,” he tweeted before tacitly admitting that “We’d create new problems, sure. But how could those new problems be worse?”

Now, before you get all indignant about the Dilbert guy’s Battle Royale brainstorm sesh, you should know that he made sure everybody was aware this was “a thought experiment, not a recommendation.” Regardless, I have since felt I missed out on inducting Adams into the Bad Tweet Hall of Fame... but holy shit do good things come to those who wait. Today, he tweeted:

Come on down to Bad Tweet Town, my Dilbert dude.

What did I just read? — After starting things off by comparing mass shooters to fentanyl addicts, Adams forewarns us that his subsequent Twitter thread “won’t be easy to read,” and man oh man, is he true to his word.

Now, apparently Adams’ own stepson died of a fentanyl overdose in 2018 at the age of 18 — something that is absolutely tragic and we wish on nobody. But in light of this firsthand knowledge (which he cites early on in his thread) Adams soon presents society with an absolutely bugfuck-nuts Sophie’s Choice dilemma:

“When a young male (let’s say 14 to 19) is a danger to himself and others, society gives the supporting family two options: 1) Watch people die [or] 2) Kill your own son,” Adams explains before revealing that he opted for the former route. “I was relieved he took no one else with him.”

Things somehow spiral even further from there, with Adams essentially calling all rehabilitation services and opioid epidemic aid akin to “living in a delusion.” “You have two options. Only two. No help is coming. Only death and suffering,” he tweets at one point, as if he’s the Werner Herzog of middling, antiquated newspaper comic strip artists.

There seems to be a motif here — Don’t worry, though: Adams has already thought of a remedy, although it might sound a bit familiar. “If I were to invent a solution to the dangerous young man problem, I think it would involve putting them all in one place so they could only hurt each other,” he writes... but “not necessarily in jail, just away from society. Once they are separated from society (and drugs) maybe help is possible.”

He concedes taking away one’s bodily autonomy “isn’t legal,” but “has to be considered at this point.” You know, because there are two and only two options, people. The Dilbert guy apparently has a real thing about throwing kids into Lord of the Flies scenarios fueled by semiautomatic weaponry and painkillers.

It’s weird, it’s creepy, and holy hell is it Hall of Fame material if there ever was any.