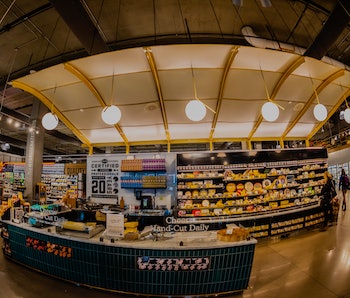 Whole Foods is desperate to quash any attempts by its store workers to unionize. According to Business Insider, the company has created an "elaborate scoring system" that ranks the likelihood each of its 510 stores will try to form a union and gain more negotiating power.

Whole Foods is a high-end grocery chain most commonly associated with clean eating and progressive values, but it's also owned by Amazon, which is notorious for closely monitoring its low-wage workers in the interest of its "customer-first obsession." Amazon's warehouse workers face strenuous conditions, with the company closely monitoring how quickly they pack boxes and swiftly firing those who don't meet its high expectations. So it's little wonder that culture is leaking into Whole Foods.

The Business Insider report says that the scores each Whole Foods store gets are based on a variety of factors, including turnover rate, "loyalty," and "racial diversity." Less diverse stores are more likely to unionize, according to Whole Foods' data. The company said in a statement that it uses the scores to determine where it needs to funnel more "resources" to stories, without specifying what those are.

"The [Team Member] Relations Heatmap is designed to identify stores at risk of unionization," the statement reads. "This early identification enables resources to be funneled to the highest need locations, with the goal of mitigating risk by addressing challenges early before they become problematic."

Preemptive union-busting — Companies like Whole Foods dislike unions because they make it more difficult to fire employees, and unionized employees tend to be better paid. Especially during times like these when the coronavirus pandemic is pummeling the economy, being able to fire staff at will is not something companies will be keen to give up. Moreover, even if unionized employees get laid off they're likely to get better severance pay and benefits than they would otherwise. Unionized workers could more easily protest to get better protections as they work through the pandemic and put themselves at risk.

Critics of unions argue that they can be detrimental because the higher costs result in more layoffs. But in this instance, that point is tough to support. Amazon is benefiting greatly from the coronavirus pandemic as people shift their purchasing online. Jeff Bezos' net worth has increased by $24 billion in the past four months alone, and Amazon has a market cap of more than $1.2 trillion.

Amazon's track record isn't encouraging — Meanwhile, Amazon recently promised to provide workers in its fulfillment centers with paid sick leave if they display COVID-19 symptoms, but workers are reporting they haven't been receiving the pay as promised.

Ranking Whole Foods outlets according to the likelihood they'll unionize is a testament to how important that is it for their workers to do precisely that. And there's a silver lining here for the company — if its employees do unionize it can stop spending money on its monitoring program. We suspect it doesn't see it like that, though.