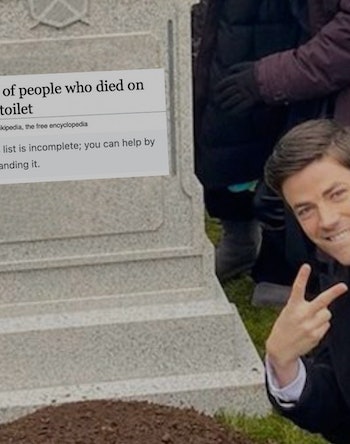 Wikipedia, the online encyclopedia that anyone can edit, puts banners at the top of certain articles to alert the reader to potential issues.

There are thousands of them: “This article is a stub,” “This article is written like a résumé,” “This article needs additional citations.” They’re little notices that let you know that an article covers a rapidly-evolving new subject, or perhaps that it contains too many buzzwords or weasel words, or that it lacks information about some crucial aspect of the topic at hand.

Most templates remain humble Wikipedia tools for categorization and communication, used only by the fastidious volunteers who write an encyclopedia for fun. But one template message did what no other had done before: it became a meme and breached the mainstream: “This list is incomplete. You can help by expanding it,” it reads.

The message, meant to be a friendly invitation to edit, becomes rather chilling when plastered on an article like the list of serial killers by number of victims or the list of people who died on the toilet, in which case it becomes quite threatening. It’s like the encyclopedia is taunting you: go ahead. Expand the list. Die on the toilet.

The message, which is on about 22,000 different pages, became a meme at some point in the mid 2010s. The bleak jokes circulated on Reddit, Twitter, Instagram, and countless message boards on the internet’s underbelly; the Know Your Meme entry for “You can help by expanding it” shows examples of the phrase next to lists that no reasonable person would want to expand: list of terrorist incidents in Great Britain, the list of genocides by death toll, the list of people burned as heretics, the list of school massacres by death count.

The template died not with a bang but with a quiet, civil request in the murky backwaters of Wikipedia — the talk page for the incomplete lists template. An anonymous editor with the username Prisencolin wrote on May 23, 2020: “As much as I like a good joke, this template is currently the subject of unnecessary internet ridicule with netizens poking fun at the phrase ‘you can help by expanding it’ specifically in contexts such as ‘List of school massacres’ or ‘List of people burned as heretics.’”

After a few others chimed in with agreement, Wikipedia user Pigsonthewing edited the template on November 21, 2020, to say "You can help by adding missing items." One person with the username Akeosnhaoe even acknowledged that the change was “to the detriment of meme culture, but oh well.”

And just like that, they laid the meme to rest.

A few deliberate jokes have remained in Wikipedia articles, but only a few. The entries in the list of cetaceans lacking photos, for example, have a notice that reads [cetacean needed] as a play on Wikipedia’s [citation needed]. But most other attempts at humor get squashed pretty quickly.

A few persistent editors against levity made a longwinded case to remove the link to self-referential humor from the self-referential humor page. And when a paragraph in Will Smith's article started with “In West Philadelphia born and raised”, anonymous online curmudgeons reworked it to remove the harmless Fresh Prince of Bel-Air reference. Ultimately, Wikipedia is not here to be funny. The encyclopedia’s contributors have long spilled ink debating how much joking to allow and have ultimately resigned to being rather humorless guardians of knowledge. One volunteer who goes by Ganesha811 brought up the definition of ‘dull’ in Samuel Johnson’s 1755 dictionary: “not exhilarating... not delightful: as in, to make dictionaries is dull work".

But before you chastise Wikipedia editors for being dour and humorless party-poopers, remember that they’ve built a free-floating Library of Alexandria for you, for no pay, and they’re the ones cleaning up all the vandalism that results from people abusing any leniency they allow. Wikipedia’s Manual of Style and supplemental guidelines are thorough — but just like the Bible or the Constitution, they’re open to much interpretation. There’s no clear line as to what is too funny for a Wikipedia article. That said, Wikipedia’s clear commitment to neutrality means that it really shouldn’t imply that you should add to an already macabre list.